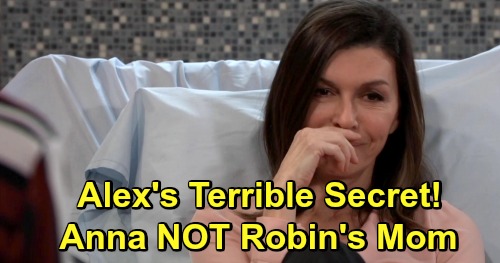 General Hospital (GH) spoilers tease that Valentin Cassadine (James Patrick Stuart) may know more than he’s letting on about Anna Devane’s (Finola Hughes) past. The same goes for her twin, Alex Devane Marick (Finola Hughes). Valentin couldhave a good grasp on what happened in their histories, but he tends to play his cards close to the vest.

Anna, Valentin and apparently Alex have known each other since spy school. It looks like Alex impersonated Anna even way back then. All three of them were double agents for the WSB and the DVX, so they’ve been mixed up with one another for quite some time. Valentin even fell in love with Alex when she was impersonating Anna.

In a recent GH episode, Anna filled Valentin in on the memory transfer. Valentin’s tone turned serious as he realized Anna was determined to find the truth. He warned that by digging into the past, Anna may find that the thing she cherishes most may not be hers.

Many General Hospital viewers assume Valentin means Peter August (Wes Ramsey) since this story screams rewrite. Plus, strong buzz from GH insiders insists Peter is Alex’s son. However, Peter isn’t quite the thing Anna cherishes most. That sounds more like Robin Scorpio-Drake (Kimberly McCullough). Anna would be absolutely devastated to learn Robin wasn’t her daughter after all.

There’s even a chance that both Peter and Robin belong to Alex. That would be a double whammy right to Anna’s heart. Regardless, Anna may at least have fears about Robin. General Hospital could cook up a massive twist to explain this crazy situation.

Anna only has one memory of sleeping with Cesar Faison (Anders Hove) and ultimately giving birth to his child. When Valentin first admitted that he knew about the secret, he told Anna that she’d had a girl. That seemed like a lie to cover up Peter’s true identity, but what if he was referring to Robin from another point in time?

There’s always been a certain level of care for Anna on Valentin’s part. Maybe he hates to tell Anna that Alex is actually Robin’s mother. Whether Robert Scorpio (Tristan Rogers) was duped by Alex or Valentin is the father himself, those could be concerns that come into play. Are Anna’s memories of Robin’s birth really her own?

Of course, we have to mention that GH fans would be livid over a bombshell like this. Since General Hospital is seemingly trying to undo the Peter mess they made, they may not be keen on making another one. Still, Anna could easily suspect Robin isn’t her daughter. Her initial fear may be the worst! After that, she could figure out that it’s Peter who isn’t truly her child.