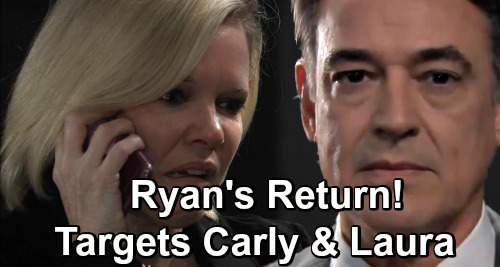 General Hospital (GH) spoilers tease that Ava Jerome’s (Maura West) problems will get even worse. All Ava seems to do now is drink, lash out and feel sorry for herself. Of course, we can’t blame her. Ava fell in love with the serial killer who murdered her daughter, so it’s a miracle she can get out of bed in the morning.

Of course, Ava will resist that idea. She opened up to Ryan as “Dr. Kevin Collins” and look how well that turned out! Ava views letting her guard down as the root of her issues, so she’ll dismiss Julian’s suggestion. However, some strange occurrences could force Ava to rethink her plans. Even if Ava chooses to avoid therapy, she’ll still have to explore her deep troubles and reopen some wounds.

When Julian came to find Ava down by the docks, she got a phone call from an unknown number. Ava could only hear heavy breathing on the other end, but she seemed a bit shaken. The line went dead after Julian took the phone, but GH obviously wants us to believe that’s Ryan – and it probably is!

There’s been plenty of talk about Ryan’s potential survival lately, so this could be the beginning of his return arc. It looks like Ava won’t be the only one targeted. On March 29, Laura Webber (Genie Francis) will get a huge shock. She’ll also make a startling discovery on April 4. There’s no guarantee these General Hospital spoilers will involve Ryan’s comeback, but they certainly could.

GH has been keeping Laura closely connected to Ava in the aftermath of the Ryan revelations. There may be a reason for that. Perhaps Ryan will plan to reunite with Ava and seek revenge on Dr. Kevin Collins (Jon Lindstrom) by going after Laura. Even Carly Corinthos (Laura Wright) could become a victim again.

Regardless, there must be some plan in play. That disturbing phone call is only the beginning! We’ll give you updates as other GH news comes in. Stay tuned to the ABC soap and don’t forget to check CDL often for the latest General Hospital spoilers, updates and news.