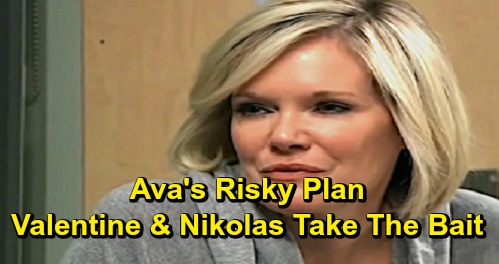 General Hospital (GH) spoilers tease that Ava Jerome (Maura West) will put a sneaky plan in motion with Nina Reeves’ (Michelle Stafford) help. GH fans know Nina made a passionate pitch about joining forces. Ava was wary at first, but she eventually let Nina talk her into it. She also revealed where that much-talked-about portrait of Helena Cassadine (Constance Towers) has been hiding all this time: under another painting.

Nina was pleased by Ava’s brilliant decision to hide the portrait in plain sight. There’s a good chance she’ll approve of Ava’s upcoming idea as well. Ava hinted that she already had their next move all planned out, but what does Ava have in mind?

Since Nina filled Ava in on the codicil that’s apparently hidden in the portrait, Ava will think they should use the Cassadine men’s desire for it against them. General Hospital spoilers say Ava will set up an auction and plan to sell the portrait to the highest bidder.

Valentin Cassadine (James Patrick Stuart) will be ecstatic during the week of December 16-20, so it sounds like he’ll be excited about this auction. After all, Valentin has plenty of cash to throw around. He knows how much is at stake, so he’ll be willing to pay whatever it takes. Of course, Nikolas Cassadine (Marcus Coloma) may be pushing Jasper “Jax” Jacks (Ingo Rademacher) to make a hefty bid of his own.

However, this has to be some sort of trap. Ava may hope to score a boatload of money around for a phony portrait – or perhaps draw Nikolas out of hiding so she can confront him. Whatever the case, Ava certainly won’t plan to sell the actual portrait and hand over all her leverage. That portrait is Ava’s golden ticket to revenge, so she’ll have to be smart about how she handles all this.

General Hospital spoilers say Nikolas and Valentin will have to be smart, too – but it’s doubtful they will be! They both have a tendency to bungle things, especially when the pressure’s on. GH fans can expect some exciting drama as Nina and Ava’s plot heats up. We’ll give you updates as other news comes in. Stay tuned to the ABC soap and don’t forget to check CDL often for the latest General Hospital spoilers, updates and news.