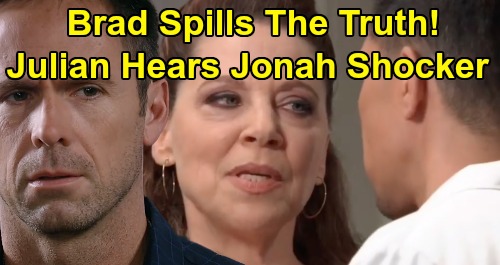 General Hospital (GH) spoilers tease that Brad Cooper (Parry Shen) will feel like he’s at the end of his rope. No matter how hard he tries to calm his fears, the guilt and concerns are taking a toll. GH fans know Brad’s keeping a massive secret about his adopted son, “Wiley Cooper-Jones.” That’s not the same kid Brad brought home from the hospital; he’s actually Jonah Corinthos.

Of course, Brad told Julian Jerome (William deVry) an altered version of events. He needed an ally to confide in, so he fibbed that he traded dead Wiley for a random woman’s baby on the side of the road. That story’s true except for the random part. Nelle Benson (Chloe Lanier) was the woman at the center of the drama that night – a night that will haunt Brad for the rest of his life.

Brad adores “Wiley,” but there has to be part of him that regrets ever getting himself into this mess. He should’ve just been honest with Lucas Jones (Ryan Carnes), who hadn’t even met Wiley at that point. It would’ve been heartbreaking to lose his newborn, but not nearly as heartbreaking as losing a son he’s bonded with. Lucas will eventually have to give up the boy he’s been raising for over a year now.

That’s because the walls are closing in due to Liesl Obrecht (Kathleen Gati), and Brad’s about to make some risky decisions. For starters, General Hospital spoilers say Brad will admit everything to Julian. He’ll reveal that Nelle gave birth to “Wiley” aka Jonah with Liesl’s help. When Nelle ran into Brad afterward, she convinced him to swap their babies.

Julian will be enraged to learn Brad left out such a crucial part of the puzzle. He’ll consider ratting Brad out since “Wiley” is Michael Corinthos’ (Chad Duell) son. This is a baby that would’ve been loved and cared for by his true parent.

That’s far from the sob story Brad offered about a mother who couldn’t take care of her child. It’s true that Nelle couldn’t do that, but it was because of her prison sentence. Michael gladly would’ve stepped up as a dad, but Brad robbed him of the chance.

Naturally, Julian will start to worry about Sonny Corinthos’ (Maurice Benard) wrath. He’ll suggest he can explain that he now learned the shocker, but Brad won’t think Sonny will buy it. Instead, Brad will offer an alternative solution. He’ll point out that he failed to eliminate Liesl as a threat. That shove off The Haunted Star didn’t take care of business, so it’s Julian’s turn to try.

Julian will be stunned when Brad argues he should kill Liesl. Brad will just want Julian to put his mob roots to good use and get the job done. He’ll note that Lucas could lose three family members if they don’t get rid of the blabbermouth. Brad won’t think he can survive Sonny’s fury, and he won’t think Julian can either. Lucas would also lose “Wiley,” so Brad will insist murdering Dr. O is the only way.

Will Julian ultimately agree to the idea? General Hospital spoilers Ava Jerome (Maura West) will make Julian reconsider his plans during the week of September 9-13. Maybe she’ll remind him of the Corinthos family horror show. Sonny Corinthos (Maurice Benard) is still a dark presence in Port Charles, so Julian may convince himself staying silent will protect “Wiley.”

Ava probably won’t be filled in on any version of this story, but she could affect the outcome. It sounds like Julian will make the decision to keep the lie going, which isn’t going to work for Sonny when it all blows up! In the meantime, what will Julian do about Liesl? He can’t murder Dr. O without GH viewers loathing him, so General Hospital will need another tactic.

Ava’s inadvertent advice could come in there, too. Julian will need all the guidance he can get as he drowns in major complications. We’ll give you updates as other GH news comes in. Stay tuned to the ABC soap and don’t forget to check CDL often for the latest General Hospital spoilers, updates and news.