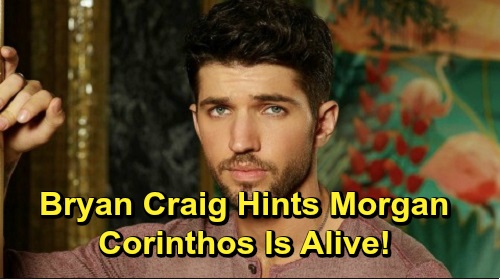 General Hospital (GH) spoilers reveal that one ABC soap star recently had some fun with fans on Twitter. GH fans will remember Bryan Craig for his time playing Morgan Corinthos in Port Charles. Morgan was presumed dead after a car explosion in 2016, but many viewers have been rooting for his return ever since.

Craig noticed a tweet from ABC Soaps in Depth, which asked who would emerge from the wreckage alive on General Hospital. He replied, “Morgan Corinthos…..?” Craig was seemingly just joking around, but it didn’t take long for fans to pipe up about how much they wanted him back on the show.

“An alive, long-lost Morgan is a story waiting to be seen on #GH,” one General Hospital viewer said. “I wish that so much!” another GH watcher exclaimed. “Come back, we need you. The Corinthos family needs you.”

There were other GH fans who suggested Craig shouldn’t tease them like this. They miss Morgan too much to joke around and would rather see him actually make a comeback in PC. One fan insisted, “Alright Bryan don’t toy with us! Come on home. We miss you!” “Don’t you dare tease us @bryan_craig but @GeneralHospital could use the excitement,” said another.

There were even a couple fans who wondered if this might be a hint about Craig’s future return to the show. Although that doesn’t seem to be the case right now, who knows what could happen down the road? There’s even a chance this tweet was an attempt to show General Hospital that the character’s missed.

We should mention that Craig’s primetime show, Grand Hotel, wasn’t picked up for a renewal. In October, Craig also sent out a weary tweet about how tough his chosen profession can be. “Man this business can beat you up good,” Craig admitted. Now we’ve got Craig tweeting about his former employer, General Hospital. It could mean nothing, but it could also mean he’s open to a return.

GH recently brought Nikolas Cassadine (Marcus Coloma) back from the dead, so they may not be keen on doing another back-from-the-dead story so soon – especially since most of Port Charles isn’t in the loop on Nik’s survival yet. That’ll be a real shock that they can get a lot of drama out of.

However, soaps are all about keeping that drama and momentum going. It won’t be long until they need something else to capture fans’ attention, and Morgan’s return would certainly do that. It would leave the Corinthos clan in shock and open up plenty of new story possibilities.