General Hospital Spoilers: Can A Nikolas Cassadine Return Save Ava From Ryan? 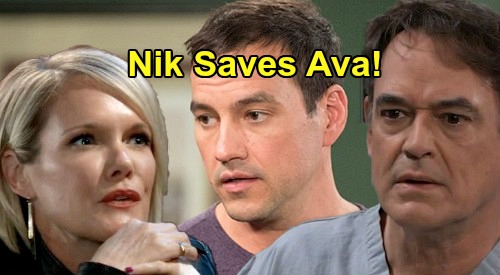 General Hospital spoilers report that Ava Jerome (Maura West) has been in the depths of despair and the bottom of a martini glass for months now. Ava needs someone to save her from herself. Ava takes offense to everything Julian Jerome (William DeVry) tries to do to help and while she desperately needs people in her life she simultaneously pushes them away. Could the possible return of Nikolas Cassadine (Tyler Christopher) save Ava?

Ava Is Drowning In Guilt

General Hospital fans know that Port Charles’ resident serial killer, Ryan Chamberlain (Jon Lindstrom), murders for two reasons. Ryan kills to protect himself and his secrets and he kills for Ava, or at least his obsession with her. Ryan is so crazy and obsessed that he killed Ava’s daughter Kiki Jerome (Hayley Erin) when he knew she was upset with her offspring.

Ava wants her murdered daughter to forgive her but believes she won’t, having dreamt of Kiki’s disappointment in her mom often. The only way the bereft mom attempts to cope with life is by drinking. Ava is trying to drown her guilt over Kiki’s death in a bottle. Ava feels that Kiki will never forgive her and in fact that she is unforgivable – some GH fans feel she might be right. Can Ava be saved from herself?

A Visit From A Friend Could Help

Ava doesn’t have many friends, which is not a surprise given her past behaviour. She did, however, become very close to Nikolas Cassadine before his alleged death. General Hospital spoilers have been reporting that a return of a very alive Nik could be in the offing. Is it possible that Nik could come back and save Ava?

Nikolas and Ava seemed to have a very good relationship before he flew out a window on Cassadine Island. Could Ava and Nik rekindle their budding relationship if he returns to Port Charles? Nik and Ava are both complicated characters comprised of some goodness blended with healthy doses of criminality and evil. As such, these two very flawed individuals understand each other. Some GH fans think Nik and Ava could make a very good natural match. Will Nik be able to help Ava get past her ties to Ryan?

Ryan Chamberlain has manipulated Ava from the start. Ava thought she was falling in love with Kevin Collins (Jon Lindstrom) bit of course learned the hard way she had become attached to his serial killer brother. Ryan has gotten so far in Ava’s head that the woman cannot sleep, eat, or function normally.

If Nik returns, can he break the hold that Ryan has on Ava? Can Nik make Ava feel worthy of love and convince her that Kiki is only in her head and would truly want her mom to move on? Love can change things and Nik could be exactly what Ava needs to get her life back on track. Can Nike save Ava from a lifetime of Ryan induced terror and depression? Come back to CDL for all your General Hospital spoilers, news and reviews.