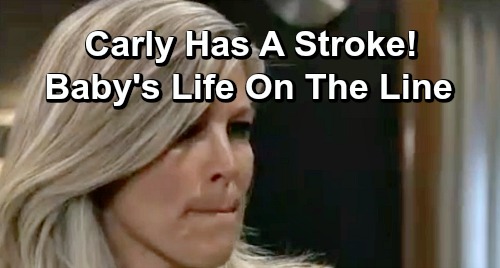 General Hospital (GH) spoilers tease that Carly Corinthos (Laura Wright) will struggle to help Josslyn Jacks (Eden McCoy). After Oscar Nero’s (Garren Stitt) death, Joss will need all the support she can get. She’ll be a mess as she tries to navigate her life without Oscar and find a way to move on.

Carly will want to help along with Joss’ other loved ones, but GH fans can probably expect some difficulties. There’s a good chance we’ll see some angry outbursts as well as some sorrowful ones. Josslyn will have to go through all the stages of grief and each of them will be hard for Carly to watch.

If Joss really starts to crumble and Carly feels unable to help, that could certainly take a toll on this concerned mom. Carly is supposed to be reducing her stress, but how can she when she’s got a mourning teenager to comfort? Josslyn’s ordeal will inevitably stress Carly to the max, which can’t be good news for her unborn child.

Unfortunately, Carly’s stress level will climb even further thanks to Jason Morgan’s (Steve Burton) plan. He’ll fight to protect Sam McCall (Kelly Monaco) from Shiloh Archer (Coby Ryan McLaughlin), but General Hospital spoilers say he could land in grave danger. Carly could find herself at the end of her rope after all this drama.

General Hospital spoilers say Carly will have a bad feeling about what’s ahead. The further along Carly gets in her pregnancy, the more Carly will feel like something’s bound to go wrong. Carly just won’t be able to let go of this nagging dread. She’ll feel like a happy, healthy baby may not be in the cards for her.

Of course, there’s pretty much never been a soap pregnancy that went off without a hitch, so Carly’s right to be worried. GH viewers know Sonny was terrified when he first found out Carly was pregnant. He specifically mentioned the possibility of Carly having a stroke, so that’s likely what’s coming up. When a character admits his or her worst fear, it tends to come true.

General Hospital spoilers say this could spark another nightmare for Josslyn. Can you imagine how she’ll feel if she loses Oscar and then faces the potential death of her mother – especially if she feels she added to Carly’s stress? Josslyn could fall apart like never before!

Naturally, Carly is going to be just fine. Her baby, on the other hand, may not be so lucky. General Hospital will undoubtedly offer more hints as time goes on, so stay tuned. We’ll give you updates as other GH details emerge. Stick with the ABC soap and don’t forget to check CDL often for the latest General Hospital spoilers, updates and news.