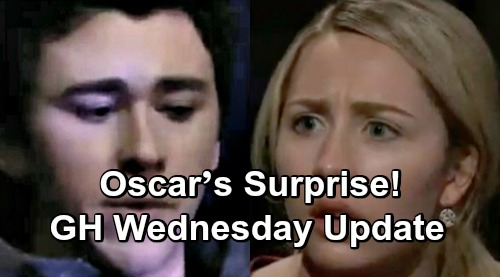 General Hospital (GH) spoilers update for Wednesday, May 1, tease that the ABC soap will dig deeper as they prepare for Oscar Nero’s (Garren Stitt) passing. They’ll explore the struggle that friends and family members face when letting go. This is a real-life issue, so GH undoubtedly wants to handle it with care.

Carly Corinthos (Laura Wright) will fret over her daughter’s broken heart, but Sonny Corinthos (Maurice Benard) will push her to be strong for Josslyn. He’ll think Carly can show Joss how to survive and carry on. Meanwhile, Drew Cain (Billy Miller) will reflect on Oscar’s losing battle and decide maybe it’s not one after all. He might suggest it’s not a total loss since Oscar will soon be at peace.

Oscar fought to stay with his loved ones as long as he could. He can’t overcome his tumor, but his fight still matters. Next, Cameron Webber (William Lipton) will talk to Trina Robinson (Sydney Mikayla) about Oscar’s ordeal. He may admit he’s having a hard time, but Trina will offer some guidance. She’ll hint that Cam needs to look inside and find out what kind of friend he wants to be.

Cameron may worry about intruding, but it’d be nice for him to reach out at least once more. Oscar and Josslyn need to know they’ve got another pal in their corner. At GH, Elizabeth Baldwin (Rebecca Herbst) will be a supportive friend as well. She’ll get why this must be difficult for Dr. Terry Randolph (Cassandra James), who couldn’t do anything to save Oscar.

After Liz encourages her to open up, Terry will confess that the story always has the same ending. In these terminal situations, it only adds up to heartbreak. At the Quartermaine mansion, Ned Quartermaine (Wally Kurth) will get a shock. He’ll bump into someone in a room he didn’t expect, so it’ll likely be Olivia Quartermaine (Lisa LoCicero). It seems she’ll sneak off to cry over Oscar and remember other losses in her past.

General Hospital spoilers say Kim will lean on Drew as they await Oscar’s demise, but Julian Jerome (William deVry) won’t neglect her. He’ll score Kim’s gratitude when he gets in touch, but that’s not why he’ll do it. Julian will just want Kim to know he loves her and would do anything to take her pain away.

Kim will definitely feel supported, but this is still going to be the toughest experience of her life. We’ll give you updates as other GH news comes in. Stick with the ABC soap and don’t forget to check CDL often for latest General Hospital spoilers, updates and news.