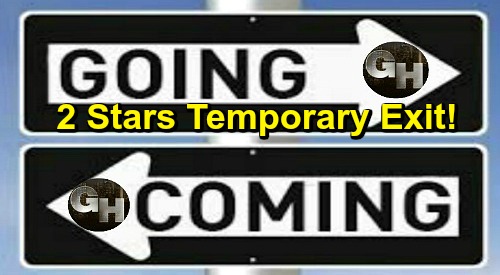 General Hospital (GH) spoilers reveal that we’ve got some comings and goings news to pass along. For starters, let’s talk about a couple of temporary exits of two fan-favorite stars. Billy Miller (Drew Cain) and Tamara Braun (Dr. Kim Nero) will leave the canvas briefly as part of their storyline. GH fans will recall that they recently talked about scattering Oscar Nero Quartermaine’s (Garren Stitt) ashes on Mt. Kilimanjaro.

Kim and Drew will follow through with that plan, which means their portrayers will be offscreen for just a bit. However, fans of these characters shouldn’t worry. Kim and Drew won’t be gone long. General Hospital spoilers say they’ve both some interesting stories happening this summer. Kim seems to be doing fairly well for the moment, but that’ll change as her grief takes a toll.

Kim will cope in a shocking way that affects Drew and Julian Jerome (William deVry) a great deal. That could mean getting drawn into Dawn of Day since both men have a Shiloh Archer (Coby Ryan McLaughlin) connection now. Drew’s past is linked to Shiloh and Julian will be worried about Shiloh getting his hands on “Wiley Cooper-Jones.”

As for Drew, he’ll find another way to cope that’s hopefully less destructive. Meanwhile, Hayden Barnes (Rebecca Budig) return is set to happen later this summer. Budig dished on her comeback in an interview with Soap Opera Digest. She was beyond excited to get a call from General Hospital and can’t wait to see what’s in store for Hayden as well as Dr. Hamilton Finn (Michael Easton).

“I think there is a lot left untold here, and there’s a lot of story to mine,” Budig said. “And not just with the baby but with everything: the engagement, the way they feel about each other. I think there are a lot of unanswered questions and a lot of things to figure out.”

Finn will certainly be overwhelmed once Hayden shows up with his kid in tow. He’ll face a medical mystery, so it’s possible his son or daughter is deathly ill. Whatever the case, Finn will have to do some reevaluating when it comes to his relationship with Anna Devane (Finola Hughes) and his lingering connection with Hayden.