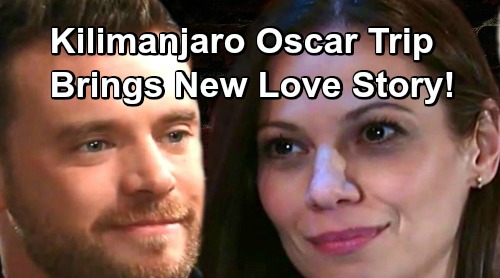 General Hospital (GH) spoilers tease that a poignant and powerful trip is coming up. Thanks to a comment made by Julian Jerome (William deVry), Drew Cain (Billy Miller) and Dr. Kim Nero (Tamara Braun) have a new plan. They’re going to scatter Oscar Nero Quartermaine’s (Garren Stitt) ashes on Mount Kilimanjaro, so that should bring some nice bonding moments.

Will this trip lead to a renewed romance for the former couple? Mount Kilimanjaro is known as the gateway to Heaven, so there’s no better place for Oscar’s ashes. GH fans know Oscar dreamed of climbing this mountain, which makes it a fitting final resting spot for the sweet teen.

Julian has given his blessing to the grieving parents, but has he really thought this through? The death of a child is incredibly difficult on the parents they leave behind. Drew and Kim share a special bond due to their mutual mourning, so that could pull them closer. Since they’re also former lovers, that adds another layer of connection – even if Drew can’t remember it yet. The vibe is still there for the duo.

Drew and Kim could easily rekindle a romance in this time of grief. When Drew thought Kim might be leaving town, he was truly concerned. Kim has a boyfriend in Port Charles along with a job as a doctor at GH. She’s not making a rash decision to leave, so Drew’s happy about that. It’s clear that Kim and Drew enjoy each other’s company.

Despite the somber nature of the task at hand, General Hospital spoilers say spreading Oscar’s ashes could bring joy, too. Drew and Kim will certainly feel like they’re honoring their son. They’ll know Oscar would’ve loved them for doing this, especially together.

Kim may tell Drew more stories from their past as they make the trek. She may talk more about Oscar’s childhood as well. It should be a long journey, so they’ll have plenty of time to chat. Drew hasn’t had a woman in over a year, and sadness could make them both vulnerable. Sleeping together won’t be off the table for these two as they seek comfort in each other.

Drew and Kim had a very intense romance once upon a time, so they may revisit that intensity. Could Kim even get pregnant at some point? Oscar certainly can’t be replaced and Kim wouldn’t look at it that way. However, the promise of new life could bring hope – and an interesting paternity mystery. It could also free up Julian if the writers choose to put him back together with Alexis Davis (Nancy Lee Grahn).

Julian may be pushing Kim straight into Drew’s arms, but that might be exactly what she needs to move forward. General Hospital spoilers say some fantastic scenes are coming up. We’ll give you updates as other GH news emerges. Stay tuned to the ABC soap and don’t forget to check CDL often for the latest General Hospital spoilers, updates and news.