General Hospital Spoilers: Could Ethan Lovett Get Through To Kristina – Should GH Bring Nathan Parsons Back? 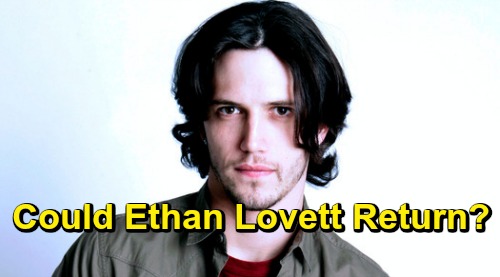 General Hospital (GH) spoilers ask if an old crush might prove to be an effective antidote for a young woman in trouble with DoD. General Hospital’s Kristina Corinthos-Davis (Lexi Ainsworth) needs someone who can reach her to save her from Shiloh Archer (Coby Ryan McLaughlin) and his Dawn of Day cult. Ethan Lovett (ex-Nathan Parsons) has been a person who could get through to Kristina when no one else could. Is a visit from Ethan just what the doctor ordered?

With Nathan Parson’s character being killed off Roswell NM, Nathan could have some free time on his hands and what better way to spend it than giving fans a glimpse of Ethan. Ethan was a General Hospital’s fan favorite, and several fans wanted Kristina and Ethan together years ago.

Kristina’s family thought Ethan was too old for her, but he was a great friend to Kristina and was there when she needed him. Kristina certainly needs someone she can trust now to save her from herself. Could Nathan return to GH and become her saving grace?

Kristina Will Turn On Sam Too

As soon as General Hospital’s Kristina finds out about Sam McCall’s (Kelly Monaco) involvement in taking Shiloh down, she will turn on Sam just like she has everyone else in her life. An outsider is going to have to get through to her, and Willow Tait (Katelyn MacMullen) might not be it.

Kristina’s opinion of Willow is already tainted because she has spoken against DOD. Sam is working overtime to try and find dirt on Shiloh and get her hands on Kristina’s trust offering, but Kristina still won’t believe her. Someone needs to think about Kristina’s past and who has been able to reach her in previous times when she bailed on the family.

Kristina almost got General Hospital’s Ethan killed by blaming him for Kiefer Bauer’s (Christian Alexander) abuse. However, Ethan forgave that and would help her in any way he could. Ethan has always been fond of Kristina.

Maybe Sonny Corinthos (Maurice Benard) should think outside the box and contact Ethan whether he wants him around Kristina or not. Kristina is now a grown woman despite her tendency to not act like it and Ethan talking to her would not be perceived as telling her what to do.

Lexi and Nathan as Kristina and Ethan had amazing chemistry when he was on the show, and some fans feel that should have been explored. It would be interesting to see if the chemistry is still there years later. Luke’s son and Sonny’s daughter could be a much better pairing than their current children who are married. Ethan is edgy and exciting and Kristina surely needs to get a life other than being a DOD disciple.

Maybe Ethan is what both Kristina and GH fans need to provide more love and excitement in the afternoon. Ethan and Kristina could be the hot couple of our GH summer. Come back to CDL for all your General Hospital spoilers, news and updates!