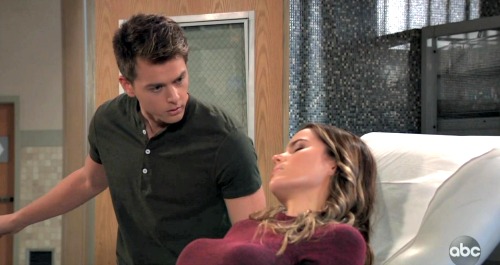 General Hospital (GH) spoilers tease that Michael Corinthos (Chad Duell) will have a mystery on his hands. Michael and Sasha Gilmore (Sofia Mattsson) both came down with something that one of them presumably gave to the other one. That put them both at GH on Friday’s GH episode, April 26, and allowed Michael to hear a crucial clue about Sasha’s real identity.

Sasha was drowsy after being given drugs, so she didn’t know what she was saying or that Michael was in the room. Michael looked awfully confused when Sasha wished Nina Reeves (Michelle Stafford) were her real mother. Sasha’s in no condition to be grilled and Michael needs a clear head to do that anyway. As a result, this topic will have to be addressed a little later.

General Hospital spoilers for May sweeps say Valentin Cassadine (James Patrick Stuart) will object to Michael and Sasha’s budding romance. Since that hasn’t happened yet, we can assume Sasha will wiggle out of this jam for now. There are some easy explanations she can offer to throw Michael off the trail.

The first one is the simplest. Sasha could just argue that the drugs were making her loopy. She might suggest that she has no idea why she would say that and laugh it off. However, Michael’s suspicions would probably remain if Sasha took that route. She’d be better off giving him something a bit more solid and even sympathetic.

Sasha used “real” mother instead of “biological” mother, which could be something that comes into play. Plenty of people consider their adoptive parents to be their “real” parents because they’ve cared for them their whole lives. Sasha has spoken highly of the mother she was raised by, but she might throw her bio mom under the bus for the sake of saving her plan.

Perhaps Sasha will tell Michael that her “real” mom – the mom she grew up with – wasn’t truly as kind and supportive as Nina. She might contend that she loves Nina and wishes they’d known each other from day one. Then again, there could be some other way Sasha tries to spin this. She can easily find some excuse to explain her shocking claims.

Whatever the case, it appears more deception is Sasha’s only option. Since Michael’s been burned by so many lies, it’s tough to believe he’d keep his mouth shut if Sasha came clean. Their relationship probably wouldn’t be moving forward if a confession was made.