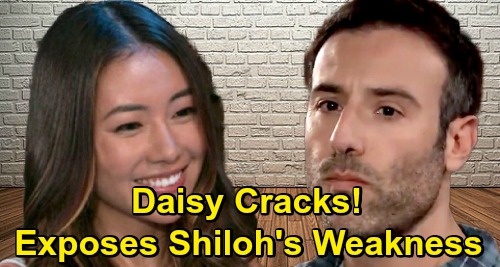 General Hospital (GH) spoilers tease that one part of the cult storyline seems to have been forgotten. Ever since Shiloh Archer (Coby Ryan McLaughlin) first appeared, the initial cult connection has disappeared. What about Daisy (Kelsey Wang), the young woman who was apparently sent to recruit Kristina Corinthos (Lexi Ainsworth)? She has to pop back up sooner or later.

Daisy was there for Kristina after the kissing debacle with Valerie Spencer (Brytni Sarpy). She made Kristina feels safe and secure in her new situation. Daisy wants Kristina to feel completely accepted by the Dawn of Day crew. She was also eager to pass along that reading material and convince Kristina to buy into the DOD mentality.

General Hospital is focusing mostly on Shiloh now, but Daisy should come back around. After all, she was volunteering at Turning Woods the day Sam McCall (Kelly Monaco) and Curtis Ashford (Donnell Turner) showed up there. Daisy was spotted picking up Yvonne Godfrey’s (Janet Hubert) copy of the Galena newspaper, which was the first sign that the cult was tied to Sam’s mystery.

Shiloh has been unflappable so far, but what about Daisy? She might not hold up as well under pressure. It may not be long until Sam and Jason Morgan (Steve Burton) realize that. They’re all set to attend a Dawn of Day seminar, so that could be some info they glean from this gathering. Perhaps Jason and Sam will realize Daisy is the key to some shocking GH discoveries.

Curtis could even be brought into this since he helped Sam early on. If Sam and Jason feel like too much suspicion is swirling around them, they could certainly turn to Curtis for help with Daisy. Regardless, Daisy could provide some secrets – whether she’s duped or just pressured into talking.

Either way, Shiloh may not be happy about whatever Daisy potentially spills. If he reacts harshly, Kristina could see a whole new side of Shiloh. He’s all about staying calm and not letting people have negative power over you, but he may have a hard time keeping his temper under control. How long until Kristina sees a glimpse of Shiloh’s true colors?