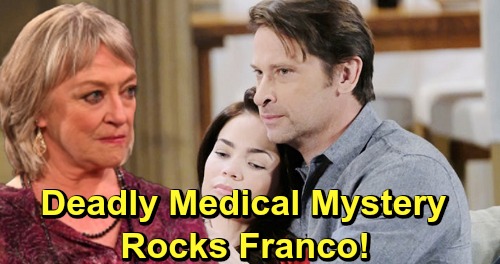 General Hospital (GH) spoilers tease that Franco Baldwin (Roger Howarth) and Elizabeth Baldwin (Rebecca Herbst) will face a difficult challenge. They’re on cloud nine at the moment, but we all knew GH wouldn’t leave them there for long! There’s a good chance Sibley Gamble’s (Veronica Cartwright) warning will mean more than Franco realizes.

Franco was amused when he discovered Sibley was a psychic. He joked around by asking who Sibley liked for the world series. Sibley couldn’t say, but she did know Franco wouldn’t be feeling like himself soon. She added that Liz needed to hang onto this one, and Liz assured Sibley that she would.

What does Sibley’s cryptic hint mean? It certainly sounds like Franco may become ill. He might battle some mysterious symptoms and not feel like himself – just as Sibley predicted.

Hayden Barnes Mixed Up In Strange Partnership With Jasper Jacks

This lines up with some other General Hospital spoilers about Hamilton Finn (Michael Easton). He’ll do his best to solve a medical mystery in the months ahead, so maybe Franco will be the baffling case he tackles.

When everyone first heard about that medical mystery, it was easy to assume it’d relate to Hayden Barnes (Rebecca Budig) or her child with Finn. Although those are still options to consider, they seem less likely now that Hayden’s back without the kid. She’s also mixed up in this strange partnership with Jasper “Jax” Jacks, so that may be enough Hayden drama going on.

Franco and Liz, on the other hand, will need a new story. Aiden Webber (Jason David) is out of school for the summer, and his bullying issues seem to have died down anyway. Franco moved past all the Ryan Chamberlain (Jon Lindstrom) chaos as well. Cameron Webber (William Lipton) extended an olive branch at the wedding reception, so there isn’t even stepson conflict going on anymore.

Will Franco Baldwin’s Mystery Illness Be A Life-Threatening One?

It makes perfect sense to kick off something new by having Franco suddenly get sick. Will his illness be life-threatening? Will Finn find himself in a race against time?

Regardless, General Hospital spoilers suggest Liz will stand by Franco through it all. Her love and support could be almost as important as Finn’s struggle to find a cure.

Are you curious to see what the future holds for Liz and Franco? Do you think Franco will become seriously ill soon? We’ll give you updates as other GH news comes in. Stay tuned to the ABC soap and don’t forget to check CDL often for the latest General Hospital spoilers, updates and news.