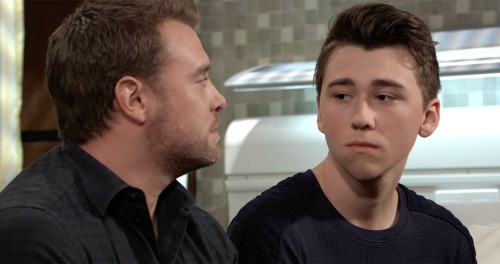 General Hospital (GH) spoilers tease that Oscar Nero’s (Garren Stitt) death is getting closer and closer. Many GH fans have been hoping to see some emotion from Drew Cain (Billy Miller) in the midst of this crisis. After all, Miller’s performance packed a punch when his Y&R character’s (Billy Abbott) daughter died on The Young and the Restless.

Unfortunately, Drew hasn’t been a very emotional guy lately. In fact, we haven’t seen much emotion out of him since he hit Port Charles, except anger. Miller is quite capable of pulling off those kinds of scenes, but GH just isn’t providing them so far. Drew clearly cares about Oscar, but he’s just not showing any signs of the deep loss he should be feeling.

Dr. Kim Nero (Tamara Braun) certainly seems ripped apart by what’s happening to her son. You could argue that Kim is more emotionally attached to Oscar since she’s taken care of him all his life. Kim built her world around her baby boy and now he’s dying.

Drew hasn’t known Oscar as long, but shouldn’t that alone bring out some difficult emotions? He’s been robbed of so much time they could’ve had together. They’ll never take the trips Oscar wanted to take or make any more wonderful memories.

You could also argue that Drew’s bottling everything up, but that can’t be helpful to him or anyone else. Kim would probably like to see the same pain she’s feeling in Drew. At least she’d know she wasn’t alone in her mourning. Kim should be able to lean on Drew as Oscar’s father and see that he’s in the same boat. As it stands right now, how can Kim grieve with someone who seems incapable of doing so?

Drew may end up showing emotion after Oscar’s dead, but will that be too little, too late? There’s a fine line between staying strong for your son and looking completely unmoved. As Oscar prepares to leave this world behind, he needs to know how much his dad loves him and is going to miss him.

What do you think about Drew’s reaction to Oscar’s imminent death? Would you like to see more emotions during these difficulties? General Hospital spoilers say the drama’s about to heat up in Port Charles, so stay tuned. We’ll give you updates as other GH news comes in. Stick with the ABC soap and don’t forget to check CDL often for the latest General Hospital spoilers, updates and news.