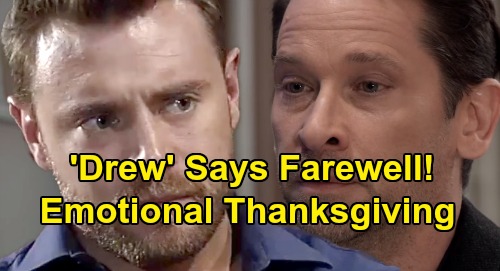 General Hospital (GH) spoilers tease that Franco Baldwin (Roger Howarth) will soon undergo a risky procedure. As GH viewers know, he currently has the memories of Drew Cain (Billy Miller) and he considers himself to be Drew. He even went to court to be able to make his own medical decisions as Drew, and he won the case, with Kim Nero (Tamara Braun) right by his side.

But then something happened. Scott Baldwin (Kin Shriner) gave “Drew” some food for thought. Scott told him about a huge sacrifice that Franco had made for him to save him from almost certain abuse at the hands of their caretaker when they were boys. That made a huge impact on “Drew” and it seemed that he started to think about Franco as a real person for the first time. Shortly after, “Drew” decided that he needed to step aside and give Franco a chance to live again.

It’s a big sacrifice that “Drew” is about to make, and the day is quickly approaching when he’ll submit himself to Dr. Andre Maddox’s (Anthony Washington) memory reversal procedure. Of course, it will be a risky endeavor, and it could result in one of four options. Franco could return completely, “Drew’s” memories could be strengthened, the procedure could have no effect, or the procedure could put the body that both Drew and Franco have inhabited into a vegetative state.

But when Monica gives the situation some thought, she’ll probably realize why “Drew” has made the decision that he did. Still, it won’t make it easy to accept, but it looks like Monica will want one thing in from “Drew” before he’s potentially gone forever – she’ll want him to spend Thanksgiving at the Quartermaine mansion. Of course, it will be a tough holiday for Monica since Oscar Nero Quartermaine (Garren Stitt) is gone, and but she’ll get comfort from having “Drew” there.

Yet the whole situation will be bittersweet for both Monica and “Drew.” They’ll surely enjoy spending time together for the holiday, but it will be difficult to know that he could very well be completely wiped out of existence. That will be tough enough for “Drew” to handle, but for Monica it will be doubly tough since she’s just lost the actual Drew earlier this year. Monica’s tough, though, and she’ll get through.

And of course, all of this means that Franco could very well be back in time for Christmas, which would be an amazing present for Elizabeth Baldwin (Rebecca Herbst), Scott, and Cameron Webber (William Lipton) – that is, if the memory reversal procedure goes the right way. Do you think Franco will be back after the procedure? Stay tuned to the ABC soap and don’t forget to check CDL often for the latest General Hospital spoilers, updates, and news.