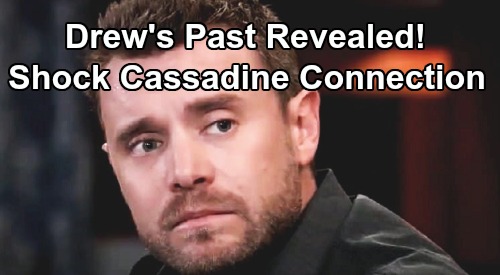 General Hospital spoilers reveal that Drew Cain (Billy Miller) will receive a mysterious package, what is in it and who sent it? Does the mysterious package have to do with Drew’s past? GH buzz is that the contents of this package will lead Drew to discover that he has a shocking Cassadine connection.

Drew knows nothing about his past, but there are other people who do. Drew will get this all important package on the new GH epsiode of July 26 – could it have something to do with his past? Could someone from the Navy Seals send Drew some memorabilia from his days as a seal? Drew doesn’t recall any of his life before he turned up in Port Charles in 2014; any information would be helpful to him.

Is it possible that Drew could have another child with someone else out there and the mother has just located him. Drew is from a prominent Port Charles family, so kids could be coming out of the woodwork if people want to try to stake claim to the Quartermaine fortune.

Drew Cain’s Mysterious Past Has Never Been Explored By Writers

Could Drew have another ex-girlfriend out there with another Quartermaine heir that he’s not aware of and this package pertains to that child.

General Hospital writers have never explored Drew’s past. The only thing GH fans know about Drew is what Kim Nero (Tamara Braun) has told him. Drew’s adoptive family has never been explored. Could Drew’s package be from someone in his adoptive family with information about his past?

Does Drew have adoptive siblings, nieces, nephews, etc.? With Oscar’s death, family members could have seen information about Drew after being separated from him years ago. Drew’s adoptive parents could even be alive; they have never been discussed at all. General Hospital spoilers claim that the contents of this package give Drew some more insight into his past.

There have not been too many people with the last name Cain on General Hospital. Frankly, there has only been one prominent character who went by the name Cain before Drew, and that was Lucien Cain (Robert Kelker Kelly) aka Stavros Cassadine!

With all of the talk about Nikolas Cassadine (Tyler Christopher) possibly returning, could this mysterious package reveal that Drew Cain’s adoptive father was Lucien Cain? Considering Drew’s adoption was probably not legal in the first place, Heather Webber (Robyn Mattson) could have helped place him with anyone, including Stavros and Cain could have been the name Stavros gave him after the adoption.

Hopefully, this mysterious package will give GH viewers some insight into who Drew Cain is and give up some of the background information they have lacked for the past five years. Stay tuned to General Hospital on ABC and keep checking CDL for General Hospital spoilers, news, and updates!