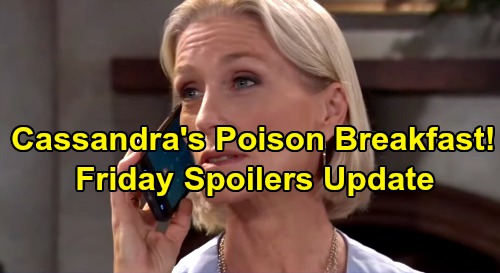 General Hospital (GH) spoilers update for Friday, August 2, tease that Cassandra Pierce aka “Sandy” (Jessica Tuck) will get ready for her breakfast meeting. She arranged to dine with Michael Corinthos (Chad Duell) and Sasha Gilmore (Sofia Mattsson) in Puerto Rico, but she’s obviously got a sneaky goal in mind.

Cassandra mentioned a “gift” during a recent phone call, and she may remind the person on the other end to send it on Friday. She’ll note that she has to dash off and meet her very important guests. Meanwhile, Sasha will enjoy being doted on by Michael. He’ll feel closer to her than ever thanks to all their island bonding and steamy sex sessions.

Michael thinks he’s dating an honest gal, but she’s not everything she seems to be. GH fans know Valentin Cassadine (James Patrick Stuart) roped Sasha into a fake daughter scheme, so she’ll continue to keep that shocker from Michael. Back in Port Charles, Kim Nero (Tamara Braun) will suggest she needs something from Franco Baldwin (Roger Howarth). He should be curious about what Kim means.

It’s possible Kim will just encourage Franco to keep being a friend to Drew. She may think it’s helpful to Drew as he continues to grieve. On the other hand, this may relate to Cameron Webber (William Lipton). Although Kim and Drew can’t be parents to Oscar Nero Quartermaine (Garren Stitt) any longer, Franco can still step up as a stepdad. Kim may not want Franco to give up on connecting with Cam.

General Hospital spoilers say Cameron and Franco will take a step in the right direction on Friday. No matter what Kim asks of Franco, her words of wisdom may help. Over with Jason Morgan (Steve Burton), he’ll stand his ground during a conversation with Elizabeth Baldwin (Rebecca Herbst). She’ll wonder what it’s going to take for Jason to accept that Franco’s changed, but he won’t think he owes Franco anything.

Since it appears Franco will be in hero mode soon, Jason might lighten up just a tad. Complete forgiveness probably isn’t possible, but Jason may offer gratitude after the chaos that’s brewing winds down. Of course, we have to get through that chaos first! Shiloh Archer (Coby Ryan McLaughlin) already kicked it off by stealing the flash drive. He intends to imprint Drew Cain’s (Billy Miller) memories, but he’ll face hurdles in that plan.

Jason suffered brain damage years ago, so Shiloh’s current memory-mapping strategy seems like a bust. Nevertheless, Shiloh will focus on that objective for now. He’ll plan to kidnap Sam McCall (Kelly Monaco) to lure Jason, but he’ll face off with Sam first. Shiloh will derail Sam and Willow Tait’s (Katelyn MacMullen) meeting, so expect plenty of insults and threats to be tossed around.

At Aurora, Drew and Curtis Ashford (Donnell Turner) will discuss the robbery with Harrison Chase (Josh Swickard). He’ll learn they suspect Shiloh swiped the flash drive, but he won’t get why. The three of them will work out a theory, which should lead them to believe Shiloh has an accomplice or two. They’ll also figure out that Shiloh could go after Jason and Sam as part of his crazy plan.

General Hospital spoilers say Curtis and Drew will try to warn “JaSam,” but they won’t get in touch fast enough. Sam will be snatched within the next few episodes, which will set off a terrible chain reaction. Jason, Curtis, Drew, Sonny Corinthos (Maurice Benard) and Franco will all be involved in this stunning storyline.

Finally, Hayden Barnes (Rebecca Budig) will have the truth serum out of her system. She’ll try to save herself more embarrassment by suggesting she doesn’t want to see Hamilton Finn (Michael Easton) anymore. In fact, Hayden will imply she’d be just fine if she never saw Finn ever again! That’s a lie based on how that truth serum affected her, but she’ll try to sell it to Finn anyway.

Some Port Charles bombshells are looming, so don’t miss all the action. We’ll give you updates as other GH news comes in. Stay tuned to the ABC soap and don’t forget to check CDL often for the latest General Hospital spoilers, updates and news.