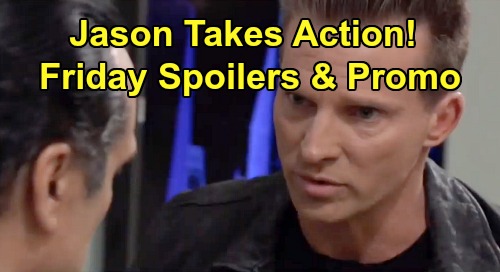 General Hospital (GH) spoilers for Friday, December 6, tease that Lulu Spencer (Emme Rylan) will have some surprising news for Maxie Jones (Kirsten Storms). GH fans know Lulu had quite a faceoff with Brook Lynn Ashton (Amanda Setton) at the Quartermaine Thanksgiving gathering. Lulu will still be fuming over Brook Lynn’s return in Friday’s episode. She’ll fill Maxie in and most likely vent about that heated holiday encounter.

Over with Olivia Quartermaine (Lisa LoCicero), she’ll insist Brook Lynn hasn’t seen the half of it. Perhaps Olivia will make it clear that she won’t be pushed around. Monica Quartermaine (Leslie Charleson) didn’t agree with the submissive approach Olivia was taking at Thanksgiving. If you give ‘em an inch, they’ll take a mile! Olivia may decide to put her foot down and refuse to let Brook Lynn be the boss of the Quartermaine mansion.

Meanwhile, Willow Tait (Katelyn MacMullen) will have an important talk with Harrison Chase (Josh Swickard. He could tell something was bothering Willow earlier, but she suggested they should table the discussion and focus on Lucas Jones (Ryan Carnes). However, Chase will carve out some time to address Willow’s troubles on Friday. It looks like Willow will admit she had a pregnancy scare, so they need to dive deeper and discuss how they really feel about kids.

Chase and Willow have both indicated that they want children someday, but Willow was a bit concerned about Chase’s comments recently. He acted like he was more into being the fun uncle than a dad, but he’ll probably assure Willow that’s only because she kept him in the dark on her scare. If Willow had indeed been pregnant, Chase would’ve gladly stepped up – just like Sasha Gilmore (Sofia Mattsson) insisted he would.

Even though Willow isn’t expecting Chase’s baby, he may assure her that he still wants children with her eventually. As for Willow, her feelings about kids could become more complicated down the road. The real Wiley Cooper-Jones died the night he came home from the hospital, so that’s going to be a major blow when the truth comes out. It could sway Willow’s opinion about risking another devastating loss.

At GH, General Hospital spoilers say Peter August (Wes Ramsey) will apologize to Elizabeth Baldwin (Rebecca Herbst). He’ll contend that if he had made different choices, Liz wouldn’t be in the position she’s in. Of course, Peter had a much larger role in the memory-mapping project than anyone knows. “Drew Cain” aka Franco Baldwin’s (Roger Howarth) procedure is coming up, so Peter will worry about new Drew memories rising to the surface.

For now, “Drew” will have another task to accomplish before he undergoes the procedure. He’ll tell Ned Quartermaine (Wally Kurth) that this is one the last things he can do for Drew Cain (Billy Miller) as Drew. Since the real Drew was presumed dead before he could complete the treehouse Oscar Nero (Garren Stitt) requested, it looks like “Drew” will hope to do his part and honor the teen’s wishes.

Jason Morgan (Steve Burton) will have the same idea in mind when he visits Ned on Friday. It sounds like Oscar’s treehouse will finally be finished soon enough. Of course, Jason’s mind is never far from Sam McCall (Kelly Monaco). He’ll also speak with Sonny Corinthos (Maurice Benard) in Friday’s episode and insist he’ll take action to make sure things work out the way he wants.