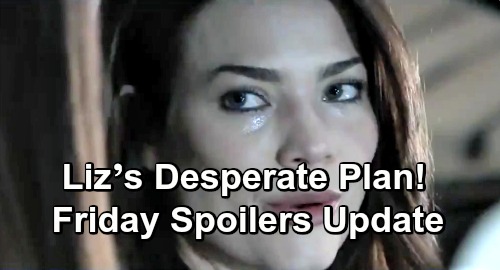 General Hospital (GH) spoilers for Friday, February 22, tease that Ryan Chamberlain (Jon Lindstrom) will proudly announce his engagement. Ava Jerome (Maura West) had some reservations, but she ultimately agreed to marry “Dr. Kevin Collins.” It certainly thrilled Ryan, so he’ll be happy to gloat when they bump into Carly Corinthos (Laura Wright).

Carly will hurl some insults, which will prompt an outburst from Ava. Despite Dr. Kim Nero’s (Tamara Braun) orders to take it easy, Carly will let her stress level skyrocket. She’ll get into a heated confrontation with Ava, but it won’t be long until they’re both storming off. Ava will just want to focus on Ryan, who treats her like a goddess and knows exactly how to charm her.

Of course, Ava doesn’t realize she’s engaged to her daughter’s killer! Kiki Jerome (Hayley Erin) was murdered by Ryan, so that shocker’s bound to blow up eventually. At Ferncliff, Franco Baldwin (Roger Howarth) will have second thoughts about Jordan Ashford’s (Briana Nicole Henry) plan. It’s one thing for the public to think he’s a monster. It’s another to let Elizabeth Webber (Rebecca Herbst) believe it.

General Hospital spoilers say Franco will try to put his foot down. He’ll want to tell Liz everything, but Jordan will insist he can’t. She thinks the only way their scheme will work is if everyone’s kept in the dark. However, that won’t stop Liz from thinking something’s up. She’ll join forces with Dr. Terry Randolph (Cassandra James) as they seek answers on Friday.

Meanwhile, Laura Webber (Genie Francis) will be desperate for a staff member to hear her. She’ll make as much noise as possible in Ferncliff’s basement. The real Dr. Kevin Collins (Jon Lindstrom) may think Laura’s efforts are futile, but she’ll feel like they have to try something.

Later, Ryan will drop by to toss around a few more threats. He’ll hope to rattle Kevin a bit and remind him who’s in charge. Over with Sonny Corinthos (Maurice Benard), he’ll make a significant phone call. Sonny recently got some disturbing updates on Dante Falconeri (Dominic Zamprogna), so he may hope he can assist his son somehow.

Other GH spoilers say Jason Morgan (Steve Burton) will fear for Sam McCall’s (Kelly Monaco) safety. He’ll wonder if Shiloh Archer (Coby Ryan McLaughlin) could be playing Sam just like she’s playing him. Jason will think they need to find out before Sam gets in too deep, so he’ll do his best to help her out.

Finally, Dr. Arthur Cabot will infuriate Anna Devane (Finola Hughes). General Hospital spoilers say he’ll drop a bomb that leaves Anna livid and ready to strike. She’ll nearly attack Dr. Cabot right in his hospital bed! Anna’s memories have been manipulated, so she won’t like the details she’s been out of the loop on.

It appears Peter August (Wes Ramsey) is actually Alex Devane Marick’s (Finola Hughes) son, so that news should come out sooner or later. General Hospital fans won’t want to miss what’s in store. We’ll keep you posted as other GH info comes in. Stay tuned to the ABC soap and don’t forget to check CDL often for the latest General Hospital spoilers, updates and news.