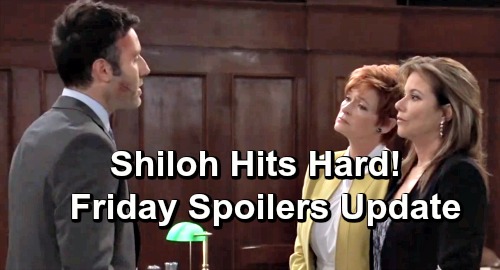 General Hospital (GH) spoilers update for Friday, June 21, tease that Josslyn Jacks (Eden McCoy) will seek answers from Dev (Ashton Arbab). She’s way past confused about how Dev knows Sonny Corinthos (Maurice Benard), so she’ll hope he can clear things up for her. Dev will sit in the kitchen with Joss and tell quite a tale about their mission in Turkey. Josslyn should have a better grip on what happened soon, so maybe a friendship will start to form.

Meanwhile, Sonny will meet up with Robert Scorpio (Tristan Rogers) and insist on repayment. He’ll call Robert’s attention to a favor that was done for him and count on one in return. Will Sonny need some assistance regarding Dev’s situation? The teen admitted he stole enough money for a plane ticket and a passport, but he now worries about deportation. If Dev is sent back to Turkey, he’ll be a goner.

Perhaps Robert can use his WSB connections to make Dev’s problems go away. He was recently forced to retire, but there are surely some old contacts who could help. Over with Valentin Cassadine (James Patrick Stuart), he’ll urge Curtis Ashford (Donnell Turner) to accept his generous offer. Valentin just wants as much info as he can get on Jasper “Jax” Jacks (Ingo Rademacher). He won’t see why Curtis should object.

Curtis will never truly trust Valentin, but he definitely needs the cash. Jordan Ashford’s (Briana Nicole Henry) medical expenses were outrageous, so every dollar counts. General Hospital spoilers say Curtis will agree to dig around and see what he can find out about Jax.

Elsewhere, Nina Reeves (Cynthia Watros) will assure Jax that she’s fierce and determined. She’ll concentrate on the bigger prize, which may mean Crimson’s overall future instead of just the next few months. Nina may think they can do huge things together if they remain a team. She has faith that Jax wants Crimson to be a success, so she’ll be glad Valentin didn’t scare him off.

In the courtroom, GH spoilers say Shiloh Archer (Coby Ryan McLaughlin) will try to get a reaction out of Alexis Davis (Nancy Lee Grahn) and Diane Miller (Carolyn Hennesy). He’ll pretend to be in real pain and argue that they seem to find pleasure in it. Alexis will confirm that it brings them great satisfaction to see Shiloh suffer. Diane will agree that Shiloh deserves any blows he faces.

Unfortunately, Willow Tait (Katelyn MacMullen) could be the one facing a blow before long. Shiloh’s attorney will resort to some cruel tactics, so Willow’s worst nightmare could come true eventually. She’s desperate to keep “Wiley Cooper-Jones’” identity a secret, but that may not be possible for much longer.