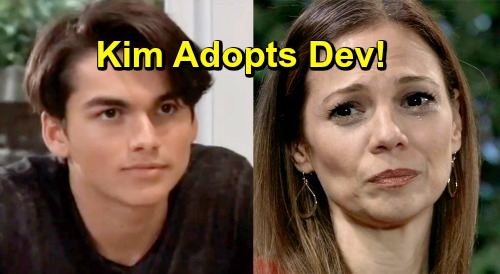 General Hospital (GH) spoilers tease that Kim Nero (Tamara Braun) will focus on her goal. She recently opened up to Julian Jerome (William deVry) and later Elizabeth Baldwin (Rebecca Herbst) about how she needs to be a mom. Kim just doesn’t know who she is if she doesn’t have a child to nurture.

Although Kim doesn’t believe she’s trying to replace Oscar Nero Quartermaine (Garren Stitt), that exactly what she’s doing. Kim gazed longingly at a family photo with Oscar and Drew Cain (Billy Miller) as she set up a meeting. She wants to have dinner with Drew and discuss something important, so she’s obviously going to drop the baby bomb.

General Hospital spoilers say Kim will plant a kiss on Drew next week and apparently hope to reel him in. She’ll be desperate to make her kid dreams come true again, but Drew won’t be on board. Shiloh Archer (Coby Ryan McLaughlin) will eventually be summoned to Kim’s place, so it’s possible things could escalate into a sex session and another Shiloh spawn.

However, we’ve already got Carly Corinthos’ (Laura Wright) pregnancy plot going on. Most GH fans probably aren’t keen on another baby storyline we don’t need and don’t want. Will General Hospital end up taking a different route instead? If this baby plan’s a bust, there may be another obsession just around the corner.

Kim just wants a child to fill the void Oscar left in her heart. She needs to be needed, so who could she dote on? Dev (Ashton Arbab) just showed up alone and in danger. He’s in a brand-new country with no idea of how things work.

When Dev was taken to the interrogation room, the poor kid thought he would be tortured. It’s clear that Dev’s seen some rough stuff and needs more support than he realizes. Sonny Corinthos (Maurice Benard) intends to help Dev, but a motherly bond might benefit him. Could Kim latch onto Dev, especially since he’s right around the same age as her beloved boy? Could she even push to adopt him?

General Hospital could take this kind of story in several directions. It might start out as something creepy, including moments were Kim hallucinates that Dev is Oscar. There’s definitely the potential for her to head into crazy territory. Dev may not want much to do with Kim at first.

Naturally, Josslyn Jacks (Eden McCoy) could end up right in the middle of all this. Perhaps she’d be torn between thinking this might help Kim cope and could make her grief even worse. In the end, Kim could find a way to bond with Dev in a healthy manner. Maybe they could truly help each other. Would you like to see Kim adopt Dev and give him a loving home?

Then again, the show could take her right off the deep end and wrap Kim’s arc up completely. It’s too early to say, but General Hospital spoilers state that Kim has many more struggles in her future. We’ll give you updates as other GH news comes in. Stay tuned to the ABC soap and don’t forget to check CDL often for the latest General Hospital spoilers, updates and news.