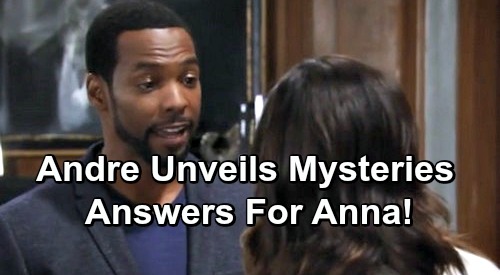 General Hospital (GH) spoilers tease that Anna Devane (Finola Hughes) will be on a mission for answers. She’s recently discovered, thanks to Dr. Arthur Cabot (Time Winters), that she and her sister Alex Devane Marick (Finola Hughes) were unwitting participants in a memory transfer experiment. As a result, some of Anna’s memories may actually belong to Alex.

Of course, Anna is determined to get to the bottom of which of her memories belong to her sister, but Dr. Cabot wasn’t much help. In a frustrating turn of events, he suggested that Anna consult with Alex about her memories, but it looks like Anna will have another contact to check with before she even thinks about tracking down her devious sister…and that’s Dr. Andre Maddox (Anthony Montgomery).

According to GH spoilers, Anna will speak face-to-face with Dr. Maddox during the week of March 11-15. Anna’s getting desperate for answers, especially because she’s starting to suspect that her memories of sleeping with Cesar Faison (Anders Hove) and giving birth to Peter August (Wes Ramsey) may be those of her sister.

It looks like Anna will leave her meeting with Dr. Maddox with at least some answers, as GH spoilers say that Anna’s suspicions will be backed up by him. But chances are, Anna’s going to have more questions for Dr. Maddox than he has answers. He may be able to tell her that she’s got some of her sister’s memories, but he likely won’t be able to tell her exactly which memories are hers and which ones belong to Alex.

But there’s always the chance that Dr. Maddox will know about the specific memories that were transferred from Alex to Anna. Anna could leave that meeting with the revelation (or a very strong suspicion) that Peter is not really her son. And then she’d have the terrible task of telling Peter that his birth mom is actually the manipulative and devious Alex.

Do you think that Dr. Maddox will tell Anna that she’s not Peter’s mom? Stay tuned to the ABC soap and don’t forget to check CDL often for the latest General Hospital spoilers, updates, and news.