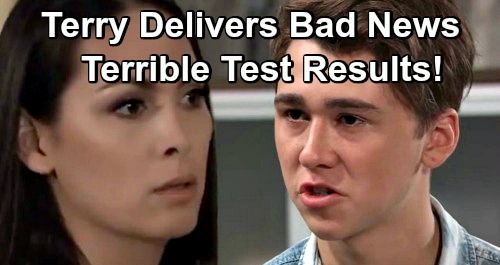 General Hospital (GH) spoilers tease that Oscar Nero (Garren Stitt) will await big news about his health. He suffered a horrible seizure at the inn in Niagara Falls, which certainly left Josslyn Jacks (Eden McCoy) rattled. She’s realizing that she’s been in denial about Oscar’s grim fate. Joss knew Oscar was dying, but she never really stopped to think about the fact that it’s happening so fast.

Cameron Webber (William Lipton) did his best to comfort Josslyn and will continue to do so. He’s definitely got some deep feelings for her, but those will remain on old as long as Oscar’s around. Oscar won’t be around much longer, so he needs to know Joss is by his side. Likewise, Josslyn needs to be there for Oscar and make as many final memories as they can.

During the week of March 18-22, General Hospital spoilers say Oscar will get ready for some important results. Dr. Terry Randolph (Cassandra James) will run a few tests and try to figure out how fast the tumor is progressing. Oscar was thrilled when Terry informed him about his reprieve, but that’s seemingly over now that he’s faced such a terrible seizure. He’ll brace for the worst as Terry comes in.

Drew Cain (Billy Miller) and Dr. Kim Nero (Tamara Braun) will also be a mess over Oscar’s health woes. They know they’ll eventually lose their son, but that doesn’t make it any easier to watch him slip away. Julian Jerome (William deVry) will try to be there for Kim and help her cope if he can.

However, it looks like Kim could end up leaning on Drew more and more. Perhaps their romance hasn’t fizzled for good! GH seemed to be testing the waters with that steamy Julian and Alexis Davis (Nancy Lee Grahn) fantasy. That may indicate that a “Julexis” reunion is on the horizon. Regardless, Kim will inevitably be drawn to Drew instead of Julian in the aftermath of Oscar’s death.

General Hospital spoilers say that death will get a step closer. These test results just may prove to Oscar and his loved ones that the end is near. There’s a good chance his tumor will have grown quickly and drastically since his last tests. Oscar appears to have made peace with his demise, so he’ll focus on his goodbyes in the coming weeks.

It sounds like the conclusion of this storyline is rapidly approaching, but it’ll kick off some new ones for Kim, Drew, Josslyn, Cameron and more. We’ll give you updates as other GH details emerge. Stay tuned to the ABC soap and don’t forget to check CDL often for the latest General Hospital spoilers, updates and news.