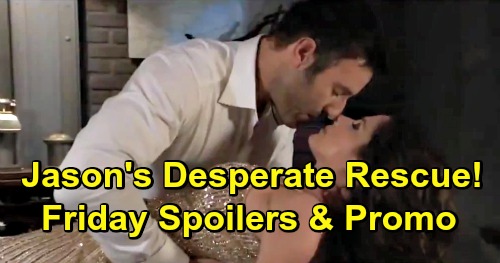 General Hospital (GH) spoilers for Friday, May 24, tease that Brad Cooper (Parry Shen) will turn to Julian Jerome (William deVry) for help. Now that they know Shiloh Archer (Coby Ryan McLaughlin) is Wiley Cooper-Jones’ father, it complicates things for Brad and Lucas Jones (Ryan Carnes) – far more than Lucas realizes! They’re not raising the real Wiley, so Brad will wonder what he’s going to do.

A riled Julian will declare that Brad’s going to shut his mouth and not say a word to anybody. He’ll refuse to let Brad destroy the family he’s created with Lucas, but Brad will remain nervous. That’s because not even Julian knows the whole story. Brad swapped his dead baby for Nelle Benson’s (Chloe Lanier) live one, so Lucas and Julian have no idea that’s actually Jonah Corinthos.

While the pressure rises for Brad, Lucy Coe (Lynn Herring) will form a plan. She’ll think maybe there’s something she can do, so this could tie in with the hunt for Ryan Chamberlain (Jon Lindstrom).

However, GH fans know Ava Jerome (Maura West) currently has the upper hand. She convinced Ryan they could have a future together and got him to put the knife down, but she whipped out a gun soon after.

Ava pointed out that neither of them’s afraid to watch the other die as she raised her weapon. Ryan may honestly be a bit turned on by Ava’s move. He’s always loved Ava’s ruthless side, so he might think they can be some murderous power couple.

Ryan will contend that they belong to each other, but Ava certainly won’t see it that way. She belongs to no one, so a shot will be fired based on General Hospital’s preview clip. Ryan may face a gunshot wound, which could leave him clinging to life. Will the cops show up before Ava can finish the job?

Harrison Chase (Josh Swickard) will ponder a clue in Friday’s new GH episode, May 24. Lulu Falconeri (Emme Rylan) will push Chase to reveal what it is, so he’ll spill it soon enough. Perhaps whatever Chase finds will lead him straight to the aftermath of Ava and Ryan’s showdown.

Ryan needs to be found for the safety of Port Charles, but his capture is particularly crucial for Jordan Ashford (Briana Nicole Henry). She’ll die if she can’t get a kidney transplant, so Ryan is her only chance at survival. Curtis Ashford (Donnell Turner) will relay that to Laura Webber (Genie Francis) on Friday and hope that this somehow works out.

It looks like Jordan will indeed get Ryan’s kidney, so stay tuned for more medical drama. Meanwhile, Sonny Corinthos (Maurice Benard) will try to reach some sort of agreement with Margaux Dawson (Elizabeth Hendrickson). He’ll hope he can pry some significant information out of her, but Margaux will put up a fight.

Jason Morgan (Steve Burton) didn’t have time to explain, so Sonny will wonder where Shiloh would go if he wanted to hide. Margaux’s probably in the loop on the tower by now, which is where Shiloh took Sam McCall (Kelly Monaco) at the last second. They started the initiation in Shiloh’s usual lair, but now he wants to watch their first new dawn together in their “special place.”

Thankfully, Jason is headed over to rescue Sam. That’s great news since Sam went through all this and now there won’t even be any proof. Jason just has to focus on getting Sam out of there before she’s violated by this sicko.

Shiloh will kiss drugged Sam as he whispers that everything’s been leading up to this. He’ll be ready to make his move, but Jason will likely burst in.