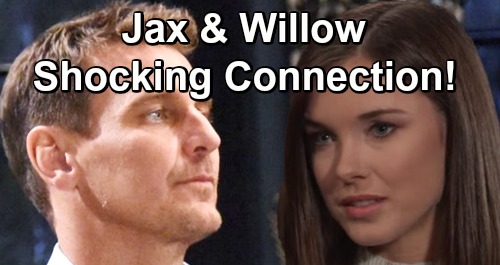 General Hospital (GH) spoilers tease that the show’s offering some interesting dots to connect. Now that we’ve seen a spark between Jasper “Jax” Jacks (Ingo Rademacher) and Nina Reeves (Michelle Stafford), we can see how things might come together. GH is likely setting Jax up as Nina’s new love interest since her relationship with Valentin Cassadine’s (James Patrick Stuart) about to crash and burn again, but there may be more to it than that.

We can’t help but notice what might be a clue that connects Jax’s story to Nina’s. Throughout Oscar Nero Quartermaine’s (Garren Stitt) death arc, Josslyn Jacks (Eden McCoy) consistently brought up the book she was reading: The Wind in the Willows. When she first mentioned it to Carly Corinthos (Laura Wright), Joss was surprised her mom had never read it.

Carly explained that Jax’s mother read it to him as a kid, so he was sure Joss would love it, too. He was the parent behind passing that book along. Josslyn was even reading that book to Oscar when he died. She fell asleep shortly before they finished it, which left Joss distraught. She later recapped the story to Jax, and that story could contain some intriguing clues.

“After all that time he had to spend in the hospital, that beautiful, green English countryside sounded really nice to him,” Josslyn said. Someone else in Port Charles told a similar story of escaping in her own mind – and her name just happens to tie in with this book! Of course, we’re talking about Willow Tait (Katelyn MacMullen).

Back when Willow confided in Harrison Chase (Josh Swickard) about her difficult childhood and time at Dawn of Day, she also recalled creating a make-believe world for herself. “When I was a kid, I had this doll named Willow, and I used to pretend that Willow and I lived on a farm,” Willow said. “It was so beautiful and peaceful.”

That sense of peace is why Willow chose that name for herself after leaving DoD. It’s possible there’s no connection, but it’d be weird to have all these clues for no reason. Why pick The Wind in the WILLOWS if there’s not going to be some sort of significance? Why have Josslyn and Willow share these similar stories of suffering and imaginary contentment? GH writers are surely going somewhere with this.

Jax will probably take over Aurora Media, which would leave him over Crimson and in Nina’s orbit all the time. We’d say there are two options here. Option one is General Hospital could so some crazy history revision and make Jax the father of Willow, who’s almost certainly Nina’s daughter. This would also make Josslyn and Willow sisters, which could pull Michael Corinthos (Chad Duell) even closer.

There’s surely some soapy way they could undo Silas Clay (Michael Easton) being the bio dad. In a world of sperm sample swapping, embryo mischief, fake memories and so much more, they could pull it off. However, option two might be a bit easier. Jax could be the one who puts it all together and reunites Nina with her real daughter. He could even help Nina and Willow make amends down the road.