The Young and the Restless Spoilers: Elizabeth Hendrickson’s Double Duty, Juggles Y&R and General Hospital – See What’s Next for Chloe

BY Marcy Cohen on May 23, 2019 | Comments: one comment
Related : Comings & Goings, General Hospital, Soap Opera, Spoiler, Television, The Young and the Restless 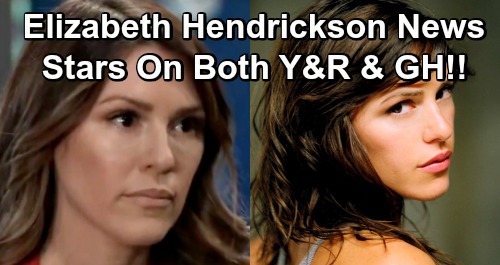 The Young and the Restless (Y&R) spoilers reveal that Elizabeth Hendrickson (Chloe Mitchell) recently confirmed some big news. In an interview with Soaps in Depth, Hendrickson assured fans she would indeed be back in Genoa City – just as one of her earlier Instagram posts hinted. Y&R viewers can look forward to Chloe’s short stint later this summer.

Due to all the return buzz, many General Hospital fans were wondering if Hendrickson might leave her role as Margaux Dawson in Port Charles. Hendrickson revealed that she’s indeed sticking around at GH. That means juggling two characters at two studios, but Hendrickson seems eager to take on this challenge. “’I’m going to be doing both [shows] this month,” Hendrickson said. “So we’ll see!”

Margaux is the district attorney, so she’s always got some drama to deal with. She’s also involved in a dangerous cult story, which is why GH needs to keep her in the game. However, Hendrickson’s role in Genoa City seems like the far bigger one. Chloe was a crucial part of Adam’s last exit since she thought she blew him to smithereens. It makes sense for Chloe to be a crucial part of Adam’s return arc, too.

Hendrickson insisted she was “very excited” about what’s in store for Chloe. It sounds like she’ll have some great material to work with. Whether you love Chloe, hate Chloe or even love to hate her, it’s tough to deny that Hendrickson plays the role well. She nails Chloe’s unhinged side, but we can also appreciate those moments where Chloe is genuinely broken.

Maybe we’ll see more of all that as Chloe’s next stint kicks off. Of course, this brings new questions for Young and the Restless viewers. Will finding out Adam is alive lead to another mental break for Chloe? Has it done that already?

Y&R still hasn’t revealed who Adam’s shooter was, although Adam himself knows the truth. Did Chloe show up to pump that bullet in him? It’s definitely a possibility to consider. Kevin Fisher (Greg Rikaart) is coming back and will revisit his dark roots. Since he’s been secretly living with Chloe in Oregon, perhaps Adam’s return from the “dead” burst their bubble.

If the shocker caused Chloe’s relapse, that’d be a good reason to Kevin to strike. There’s even a chance he pulled the trigger on Adam, but Chloe seems like the better option so far. Regardless, it’ll be interesting to see what the future holds for Chloe. If she settles down, she might have a lengthier future in GC. Chloe could wiggle out of her legal woes if the show wants her to.

General Hospital has certainly been letting talent slip away lately. Michelle Stafford bailed on her role as Nina Reeves to return as Phyllis Summers (currently played by Gina Tognoni) on Y&R. The Young and the Restless also scooped up Brytni Sarpy to play Elena Dawson. She was previously quite underutilized as Valerie Spencer at GH.

If Y&R wants to keep the trend going, they could lock Hendrickson in with a contract down the road. Whatever happens, it’s nice to know more Chloe chaos is looming! We’ll give you updates as other details emerge. Stay tuned to the CBS soap and don’t forget to check CDL often for the latest Young and the Restless spoilers, updates, and news.