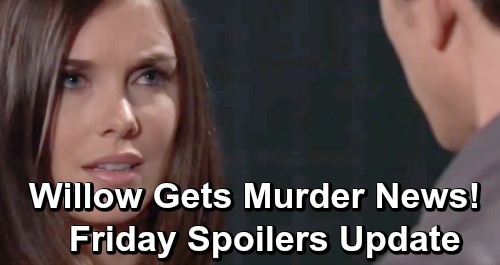 General Hospital (GH) spoilers update for Friday, June 28, tease that Carly Corinthos (Laura Wright) will once again fear for her unborn child. She’ll be pretty freaked out during her next doctor’s appointment, but Sonny Corinthos (Maurice Benard) will be there to offer support. Carly will just want to know if something’s wrong with her baby. She’ll need some peace of mind, so let’s hope she gets it.

Meanwhile, Kim Nero (Tamara Braun) will focus on conceiving a baby of her own. That’s her one and only project right now. Since Drew Cain (Billy Miller) rejected her, Kim insisted she’d just have to find another way. Unfortunately, she’s chosen an awful path by turning to Shiloh Archer (Coby Ryan McLaughlin).

GH spoilers say Kim will elaborate on her grief and why she wants another son or daughter. She’ll think it’s crucial to give Oscar Nero Quartermaine (Garren Stitt) a sibling, so she’ll count on Shiloh to pitch in. Kim’s hoping to bring Oscar back by bringing new life into the world. She knows this kid won’t be Oscar, but she still believes it’ll somehow give her the comfort she craves.

Shiloh’s usually all about having sex with vulnerable women, so he may suggest he can make Kim’s dream come true. Whatever the case, it’s clear that Kim’s in deep trouble here. Speaking of deep trouble, Brad Cooper (Parry Shen) will feel like there’s no way out. He’ll decide grabbing “Wiley Cooper-Jones” and getting out of town would be his family’s best option.

Of course, Lucas Jones (Ryan Carnes) probably won’t be on the same page. He may think they need to stick around and tackle the issue head-on. Too bad Lucas doesn’t know the real issue! This kid is actually Jonah Corinthos, so Brad will remain on edge about the baby swap truth coming out.

Next, Willow Tait (Katelyn MacMullen) will get a visit from Michael Corinthos (Chad Duell). She’ll be taken aback when Michael admits her father was murdered. Michael will explain Carol Lockhart’s (Mandy Musgrave) confirmation and assure Willow that they’re going to get justice. Willow will seethe over Shiloh’s deadly involvement, but she’ll ultimately concentrate on keeping innocent “Wiley” safe.

Nevertheless, Sasha’s mind will be made up. She’ll feel confident she can play it cool and keep Nina Reeves (Cynthia Watros) in the dark on her fake daughter status. Sasha may even argue it’d break Nina’s heart if she left. She might suggest she’s doing Valentin a favor, but he just won’t see it like that. Valentin will warn Sasha to stay tight-lipped and be careful – or she’ll risk his fierce wrath!

Finally, General Hospital spoilers state that Nina will take a firm stance. She’ll tell Jasper “Jax” Jacks (Ingo Rademacher) that she needs plenty of room, which probably means she doesn’t want him looking over her shoulder. Nina will feel like she’s everything covered at Crimson, so she won’t think Jax has to babysit.

It sounds like some fantastic scenes are coming up. We’ll give you updates as other GH news emerges. Stay tuned to the ABC soap and don’t forget to check CDL often for the latest General Hospital spoilers, updates and news.