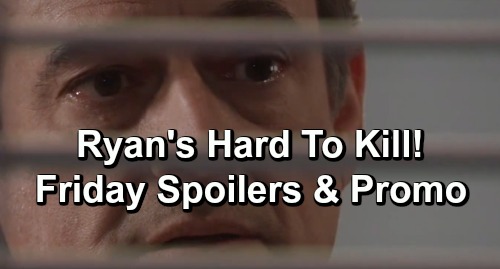 General Hospital (GH) spoilers for Friday, June 7, tease that Maxie Jones (Kirsten Storms) will confide in Nina Reeves (Michelle Stafford). She might share a little about her plan to reunite Lulu Falconeri (Emme Rylan) and Dante Falconeri (Dominic Zamprogna) ASAP. Regardless, Maxie will ultimately declare that it’s Nina’s turn. Since Nina will have something to share as well, Maxie will suggest she should let her rip!

Nina recently made a deal with Jasper “Jax” Jacks (Ingo Rademacher). When it comes to business Jax is fair but firm. He’s clearly quite charmed by Nina, but he expects her to do her job correctly. Nina is also eager to impress Jax, so she’ll need a plan to pull it off. GH fans know Nina vowed to boost circulation within three months to get more money, but she could use Maxie’s help with a strategy.

While Nina and Maxie figure out their next move, Jax will catch Carly Corinthos (Laura Wright) off guard. He’ll show up with a giant surfboard and leave Carly wondering what’s up. She’ll be sure Jax must have an excellent explanation, so she’ll urge him to start talking. Perhaps Jax will hope he can lift Josslyn Jacks’ (Eden McCoy) spirits, but Carly may advise against pushing too hard.

Nevertheless, General Hospital spoilers say Jax will defend his own agenda in Friday’s episode. He may tell Carly that Dad knows best! At GH, Dr. Kevin Collins (Jon Lindstrom) will look tortured as he gazes in Ryan Chamberlain’s (Jon Lindstrom) hospital room. He’ll tell Laura Webber (Genie Francis) that his brother is hard to kill – and that’s true in more ways than one.

Ryan slipped into a coma following his surgery, but he’s hanging on so far. The guy seems to have nine lives. However, Ryan’s hard to kill for a different reason to Kevin. Based on his chat with Franco Baldwin (Roger Howarth), there’s certainly part of Kevin that would love to march in and murder his evil twin. It’d mean taking the life of someone who’s helpless though, and that’s just not Kevin.

At Charlie’s Pub, Franco will slide in at the bar and tell Ava Jerome (Maura West) he comes bearing good news. He may admit that Ryan’s comatose and may not make it. Franco may contend that the planet could be minus one serial killer soon. They would both love to see Ryan get the deadly fate he deserves.

Other General Hospital spoilers say Elizabeth Webber (Rebecca Herbst) will make an announcement in the GH waiting area. She’ll explain that Jordan Ashford (Briana Nicole Henry) requested a DNR, which should leave Curtis Ashford (Donnell Turner) and T.J. Ashford (Tajh Bellow) deeply concerned. Jordan mentioned this to Stella Henry (Vernee Watson) in hopes that she could keep the guys from fighting it.

Stella will do her part to calm a panicked Curtis and T.J. down, but Jordan will thankfully pull through and ease everyone’s mind. Across town, Sasha Gilmore (Sofia Mattsson) will set up a date with Michael Corinthos (Chad Duell). She’s obviously falling hard, which can only spell trouble since Sasha’s pretending to be Nina’s daughter. That’s a huge secret that could dramatically affect her romance down the road.

It sounds like another fantastic episode’s coming up. We’ll give you updates as other GH details emerge. Stay tuned to the ABC soap and don’t forget to check CDL often for the latest General Hospital spoilers, updates and news.