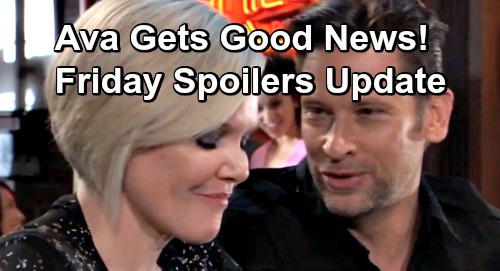 General Hospital (GH) spoilers update for Friday, June 7, tease that Jasper “Jax” Jacks (Ingo Rademacher) will give Carly Corinthos (Laura Wright) a shock. When he walks in with a huge surfboard, Carly will definitely wonder what her ex is up to. Jax will explain what he has in mind, which could involve a dose of fun in sun for Josslyn Jacks (Eden McCoy). Maybe he’ll think a surprise trip is in order.

Anything that might get Joss’ mind off her grief could help, but Carly may be wary of overstepping. If they push too hard, Josslyn could close herself off. Regardless, Jax will think his idea’s brilliant and try to sell Carly on it this Friday. Meanwhile, Nina Reeves (Michelle Stafford) will exchange info with Maxie Jones (Kirsten Storms). They’ll both have some important updates to pass along.

After Maxie presumably talks about her goal of finding Dante Falconeri (Dominic Zamprogna) and Peter August’s (Wes Ramsey) disapproval, she’ll let Nina make her spiel. General Hospital spoilers say Nina will tell Maxie all about her meeting with Jax and the plan to boost circulation. Nina’s only got three months to make it happen if she wants more money, so she’ll need all hands on deck.

GH fans can expect Maxie to pitch in however she can. She’ll work on an interesting strategy with Nina in Friday’s episode. Over with Ava Jerome (Maura West), she’ll still be sitting at the bar area of Charlie’s Pub. Franco Baldwin (Roger Howarth) will waltz in with a smile and some good news to share. He might reveal that Ryan Chamberlain (Jon Lindstrom) is in a coma and may not make it.

Franco may think Ava’s going to get the deadly outcome she wants without paying the price for it. Outside Ryan’s room at GH, Dr. Kevin Collins (Jon Lindstrom) will wrestle with a dilemma. Part of him wants to snatch up a pillow and murder Ryan right in his room. Another part of Kevin knows he’d be stooping to Ryan’s level if he did.

Kevin will tell Laura Webber (Genie Francis) that his brother’s hard to kill, so it’s good that she’ll be there to listen and guide him. Killing Ryan wouldn’t be worth getting locked up and losing everything. Kevin already went through a nightmare like that at Ferncliff, so there’s no need to go down that road again.

Other General Hospital spoilers say Jordan Ashford’s (Briana Nicole Henry) DNR will make a few waves. Stella Henry (Vernee Watson) knew it would, but she promised to back up Jordan’s decision if necessary. Once Elizabeth Baldwin (Rebecca Herbst) mentions the DNR to Curtis Ashford (Donnell Turner) and T.J. Ashford (Tajh Bellow), Stella will have to step up and make them understand.

This is just a precaution in case the surgery heads south. Jordan doesn’t want to find herself stuck in a vegetative state, so Stella will explain this as gently as possible. T.J. and Curtis still won’t like this, but maybe Stella can curb their anxiety and get them to focus on positive thoughts.

Elsewhere, Michael Corinthos (Chad Duell) and Sasha Gilmore (Sofia Mattsson) will grow closer. They’ll make plans for another date night, but each one of these gets Sasha in deeper trouble. The harder she falls for Michael, the more pain she’ll face when it all blows up.

Michael thinks he’s finally found an honest woman, but she’s been telling one whopper of a lie. Will Sasha lose Michael when he learns she’s not Nina’s bio daughter? General Hospital spoilers say their relationship will be put to the test down the road.

It looks like some excellent scenes are on the way. We’ll keep you posted as other GH details emerge. Stay tuned to the ABC soap and don’t forget to check CDL often for the latest General Hospital spoilers, updates and news.