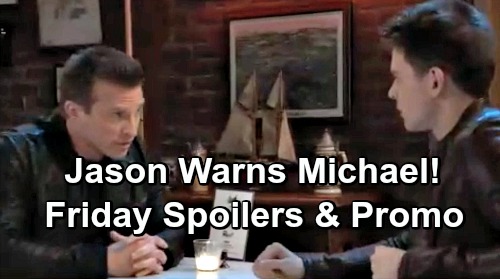 General Hospital (GH) spoilers for Friday, March 15, tease that Valentin Cassadine (James Patrick Stuart) will be intrigued. After Anna Devane (Finola Hughes) gets in touch, Valentin will meet up with her and contend that she must be desperate. He’ll realize Anna wouldn’t come to him unless he was her only option.

Anna will suggest that she’s only desperate for information. She may hope Valentin can help her contact Alex Devane Marick (Finola Hughes) and sort through her memories. Anna is determined to find out which memories are false, so she needs to hear Alex’s side of the story.

Over with Dr. Hamilton Finn (Michael Easton), he’ll give Harrison Chase (Josh Swickard) some bad news. Finn will seem quite serious as he tells Chase to call their dad. Has Gregory Chase (James Read) had another health setback? Whatever the case, maybe GH will finally revisit the mysterious family drama that’s hidden just under the surface.

Other General Hospital spoilers say Molly Lansing-Davis (Haley Pullos) will try to talk some sense into her sister. Now that Molly knows more about Dawn of Day, she’s convinced that Kristina Corinthos-Davis (Lexi Ainsworth) has joined a cult. Molly will urge Kristina to open her eyes and get away from Shiloh Archer (Coby Ryan McLaughlin). She won’t think this is a positive environment for Kristina at all.

Naturally, Kristina will disagree and lash out. When Molly argues that her sis isn’t acting like the Kristina she knows, Kristina will fire back that Molly doesn’t know her at all – at least not anymore. General Hospital spoilers say Molly will share her fears with Jason Morgan (Steve Burton) soon. He’ll listen to Molly’s troubles and promise to do everything he can to protect Kristina.

At the DoD community house, a shirtless Shiloh will continue to make Sam uncomfortable. He’ll grow curious about the real reason for this visit and ask if Sam’s worried about his safety. Sam might as well say yes and let Shiloh think she truly cares. However, this encounter will definitely leave Sam more concerned about Kristina and the danger she’s in.

Across town, General Hospital spoilers say Jason will have updates for Michael Corinthos (Chad Duell). Michael may wonder if they should fill Sonny Corinthos (Maurice Benard) in on the Kristina situation. It looks like he may get caught up in Kristina and Molly’s fight, so he’ll know Kristina could use her father’s support.

Jason will understand that, but he’ll feel like Sonny’s current mission is too important. He’ll bring Michael up to speed on what’s happening in Turkey and suggest Sonny has to stay focused. Finding Dante Falconeri (Dominic Zamprogna) has to be Sonny’s priority right now.

Fortunately, Sonny’s on the verge of that long-awaited reunion. He’ll pull a gun and demand to know where his son is in Friday’s GH episode. It won’t be long until Dante comes around the corner looking fierce and ready to rumble. He’ll have to shoot Sonny at some point, so some intense drama’s coming up thanks to his undercover assignment.

General Hospital fans won’t want to miss the shocking scenes ahead. We’ll keep you posted as other GH details emerge. Stick with the ABC soap and don’t forget to check CDL often for the latest General Hospital spoilers, updates and news.