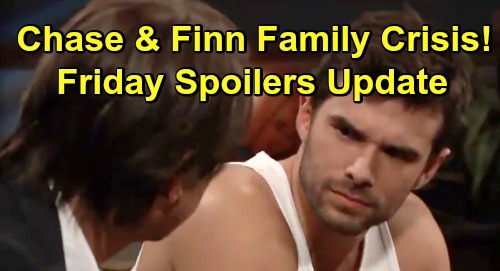 General Hospital (GH) spoilers for Friday, March 15, tease that Molly Lansing-Davis (Haley Pullos) will push her sister too far. Kristina Corinthos-Davis (Lexi Ainsworth) is sinking deeper and deeper into Dawn of Day, but Molly clearly doesn’t approve. She just called DoD a cult, so Kristina will be outraged over the way Molly’s smearing Shiloh Archer (Coby Ryan McLaughlin) and his community.

Molly won’t even recognize Kristina anymore, but Kristina will argue that there’s a reason for that. She’s changed, so she won’t think Molly knows the real her. Of course, Kristina will believe Shiloh and all her DoD buddies get it. She’ll feel like they’re the only people she can turn to, which is exactly the mindset Shiloh wants her to have.

Speaking of Shiloh, he’ll resist putting a shirt on despite Sam McCall’s (Kelly Monaco) request. It looks like Shiloh will want to make Sam squirm. He’ll ask questions to get to the bottom of this visit and wonder if Sam thinks he’s in danger. Shiloh will hope he can pull Sam closer and make her truly care about him.

Like Harmony (Inga Cadranel) suggested, Shiloh seems to be obsessed with Sam – or at least obsessed with pulling off an agenda that centers around her. Meanwhile, Sonny Corinthos (Maurice Benard) will be focused on a goal of his own. He’ll close in on Dante Falconeri (Dominic Zamprogna) as he fights to bring his son back to Port Charles.

Sonny will corner someone with a gun and demand to see Dante, so he’ll get his wish. However, it appears Dante will still be undercover. He’ll put on an evil act and even shoot Sonny as part of the plot, so some stunning moments are coming up over the next couple episodes.

Back in PC, Jason Morgan (Steve Burton) will advise against distracting Sonny. He’ll shut down Michael Corinthos’ (Chad Duell) idea to inform Sonny of something, so this probably involves spiraling Kristina. Jason will think Dante’s dilemma has to take precedence. There’ll be time for Sonny to handle Kristina’s DoD problems later, so Michael will trust Jason’s judgment.

General Hospital spoilers say Jason will soothe Molly’s concerns, too. He’s scheming with Sam to take down Shiloh, so he may think they’re on the verge of gaining the upper hand. Across town, Harrison Chase (Josh Swickard) is in for a shock. Dr. Hamilton Finn (Michael Easton) will show up with news regarding their father, Gregory Chase (James Read).

Finn will insist that Chase had better call their dad, so the detective will naturally worry. Is Gregory ill again or does this involve some other drama? Either way, Chase and Finn will have to come together as brothers. They can lean on each other as they deal with this GH family crisis.

Other General Hospital spoilers say Anna Devane (Finola Hughes) will need Valentine Cassadine’s (James Patrick Stuart) help. He’ll think desperation is evident, but Anna will just be eager to get any info she can. Valentin may be Anna’s best option, so she’ll use him to her advantage. This undoubtedly involves Alex Devane Marick (Finola Hughes) and getting in touch with her as soon as possible.

Anna can’t rest until she makes sense of the memory madness, so she’ll count on Valentin to come through for her. GH fans won’t want to miss the twists and turns ahead! We’ll give you updates as other details emerge. Stay tuned to the ABC soap and don’t forget to check CDL often for the latest General Hospital spoilers, updates and news.