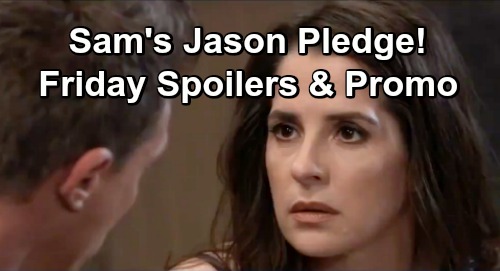 General Hospital (GH) spoilers for Friday, May 3, tease that Dr. Kim Nero (Tamara Braun) will find herself feeling lost and alone. Now that Oscar Nero’s (Garren Stitt) gone, the thought of going back home may be tough. However, Drew Cain (Billy Miller) will think there’s an easy solution. He’ll urge Kim to just stay at the Quartermaine mansion, so this could bring some opportunities to grow closer.

Meanwhile, Valerie Spencer (Paulina Bugembe) will use her binoculars while on a stakeout. She’ll spot something surprising, so she’ll give Harrison Chase (Josh Swickard) a call. Valerie will insist that things just got interesting, but this could be a bit of a trick. General Hospital spoilers say Alexis Davis (Nancy Lee Grahn) will initiate “Plan B” on Friday, so Valerie’s clue may simply be a diversion.

Sonny Corinthos (Maurice Benard) will have some concerns about Alexis’ ability to pull this off, but she may insist she’s got it covered. Alexis has to be there for Kristina, but she can’t let the cops follow her to the right location. Luckily, they’re watching Alexis’ car and not Alexis herself. That’s how she intends to dupe Chase and Valerie – at least long enough to attend the upcoming session.

Over with Dr. Neil Byrne (Joe Flanigan), he’ll ask Kristina Corinthos-Davis (Lexi Ainsworth) how she’d feel about seeing her parents. Kristina won’t look thrilled, but she won’t look completely opposed to it either. She’ll also enjoy a friendly conversation in Friday’s GH episode. It looks like Kristina will share a laugh with Milo Giambetti (Drew Cheetwood), so she could start feeling more like herself again.

Other General Hospital spoilers say Michael Corinthos (Chad Duell) will have a tense discussion with Shiloh Archer (Coby Ryan McLaughlin). It appears Kristina will be the topic, but Shiloh will assure Michael he truly cares about her well-being. Of course, Michael won’t buy that. He might suggest that if Shiloh only wants what’s best for Kristina, maybe he should respect her wishes for some time away.

Unfortunately, Shiloh doesn’t believe that bogus story any more than Chase and Valerie do. He’ll remain convinced that Jason Morgan (Steve Burton) is behind Kristina’s disappearance. Speaking of Jason, he’ll meet back up with Sam McCall (Kelly Monaco). They’ll talk about Shiloh’s trip to Sam’s place and his insistence that she offer him a pledge about someone close to her.

Jason will point out that this has to look legit. He’ll contend that if Sam really wants to help Shiloh, she’ll make that pledge about Jason. This could be a bit tricky though. The pledge is about to be about a family member or another loved one. By handing over info on Jason, wouldn’t that be an admission that he still means a great deal to Sam?

Still, Shiloh might be desperate enough for Jason dirt that he wouldn’t care. Sam will have to mull over her options and figure out the best tactic. Finally, Julian Jerome (William deVry) will bump into Willow Tait (Katelyn MacMullen). That could bring some awkward moments, but Willow will have more important matters to attend to. She’ll be opening up to Kristina soon, so she’ll want to be prepared.

General Hospital has another fantastic episode in store. We’ll give you updates as other GH news comes in. Stay tuned to the ABC soap and don’t forget to check CDL often for the latest General Hospital spoilers, updates and news.