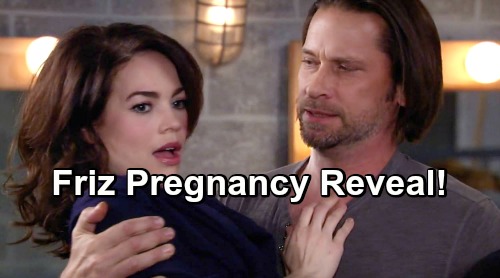 General Hospital (GH) spoilers tease that one Port Charles couple is expecting a baby, so the mystery of who it’s going to be is still creating buzz. GH writers may have offered some hints in recent episodes. Could Franco Baldwin (Roger Howarth) and Elizabeth Webber (Rebecca Herbst) be the ones with an impending bundle of joy? Let’s consider some crucial clues from recent scripts.

On February 4, Franco struggled over the news that he was a person of interest in the serial killer’s string of murders. He paid a visit to Kiki Jerome’s (Hayley Erin) grave to have a chat with her. Franco thought of Kiki as his daughter, especially since he truly believed he was Kiki’s father for most of her young life.

After Ava Jerome (Maura West) appeared, Franco expressed his gratitude. He was thankful that Ava hadn’t shared custody of Kiki years ago. Franco insisted he wouldn’t have been a good dad back then. Of course, Franco is a changed man these days. He’s proven to be an excellent father figure to Liz’s boys.

Franco even gets in the kitchen and bakes cookies with Aiden Webber (Jason David), so he’s quite involved in the kids’ lives. Since General Hospital brought up how Franco wouldn’t have been a good father back then, they may be highlighting the fact that he is one now. Perhaps this soon-to-be stepdad will welcome a child with Liz down the road.

On February 5, another potential baby hint surfaced. When Franco and Liz were at the ice-skating rink with Aiden, Lucas Jones (Ryan Carnes) and Brad Cooper (Parry Shen) showed up with “Wiley” Cooper-Jones. Aiden mentioned how he’d love to have a baby brother or sister, which led to some giggles from Liz and a smile from Franco.

Since General Hospital spoilers say a jailhouse “Friz” wedding is coming up, could Liz be hiding a little secret? Liz was already planning to marry Franco, but a bun in the oven would really seal the deal on their future together. She might reveal that they’re having a baby after they tie the knot. That could lift Franco’s spirits and help him keep fighting for what he knows in his heart.

Do you think Franco and Liz will announce a pregnancy soon? We’ll give you updates as other GH details emerge. Stay tuned to the ABC soap and don’t forget to check CDL often for the latest General Hospital spoilers, updates and news.