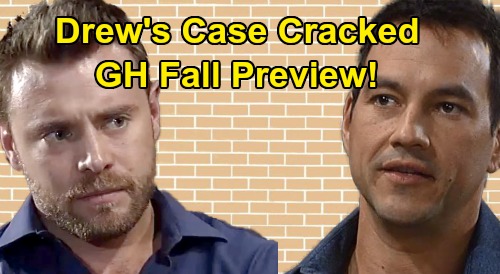 General Hospital (GH) spoilers tease that some bombshells are brewing in Port Charles. There’s much more drama to come, so we’ve got a fall preview for you. Let’s take a look at some hot storylines, which are about to get even hotter.

First, we should talk about Franco Baldwin (Roger Howarth). His memory crisis will continue to draw Kim Nero (Tamara Braun) closer – much to Julian Jerome’s (William deVry) chagrin. General Hospital spoilers say Kim will finally cave in and sleep with Franco. The pull of Drew Cain’s (Billy Miller) memories will just be too strong to fight.

As for Elizabeth Baldwin (Rebecca Herbst), she’ll have to decide how much she’s willing to risk. Liz recently learned all the horrible outcomes Franco could face, but she can’t just ignore the best possible one. Franco could come back to Liz if Andre Maddox’s (Anthony Montgomery) procedure works. Still, Peter August (Wes Ramsey) could prevent Andre’s efforts to make amends if he strikes another blow.

Liz will have to worry about Kim in the meantime. She’ll know Franco wouldn’t be cheating on her if he were still himself. Nevertheless, it’ll be heartbreaking to watch Franco focus on only Kim. Once Liz realizes Franco and Kim hooked up, it should bring plenty of tension.

Other GH spoilers say Laura Webber (Genie Francis) will be a busy woman this fall. She’ll find herself drifting back into Ava Jerome’s (Maura West) orbit over Ryan Chamberlain (Jon Lindstrom) issues. Laura will become the heart of the big codicil story as well. There’s a good chance this is all building to Nikolas Cassadine’s (Tyler Christopher) exciting comeback.

Until then, Laura will face Cassandra Pierce’s (Jessica Tuck) gun along with Curtis Ashford (Donnell Turner). They’ll get into a struggle with Cassandra, which will end with the gun pulled on the villainess instead. Cassandra will be hauled down to the police station and arrested, but a call to Valentin Cassadine (James Patrick Stuart) could change everything and set up more fall shockers.

At Pentonville, Nelle Benson (Chloe Lanier) will get to know Ryan a bit better and bond with Shiloh Archer (Coby Ryan McLaughlin). Of course, Nelle wouldn’t be Nelle without a few tricks up her sleeve! She’s reeling Shiloh in by dangling his son in front of him, but this seems like a sneaky setup.

Nelle knows “Wiley Cooper-Jones” is actually her baby with Michael Corinthos (Chad Duell), not Shiloh’s baby with Willow Tait (Katelyn MacMullen). The former cult leader is in for a rude awakening down the road. As escape plot is likely brewing with Ryan too, so Nelle’s plans will have explosive consequences for many other characters.

Over with Sonny Corinthos (Maurice Benard), he’ll prepare to welcome a new addition. The birth of Carly Corinthos’ (Laura Wright) baby is coming up, but there’ll naturally be some hurdles due to this child’s health. Sonny and Carly’s fears will grow as this crisis threatens to tear apart their family. Carly’s health could also be in jeopardy, so this fall will bring some difficult moments for the Corinthos clan.

Meanwhile, Hamilton Finn (Michael Easton) will become suspicious of Hayden Barnes (Rebecca Budig). He’ll sense that she’s not telling him everything and wonder if she’s got a secret he’s involved in. The answer is yes since we know Hayden’s hiding their little girl!

General Hospital spoilers also point to some Dev Cerci (Ashton Arbab) problems. His relationship with Josslyn Jacks (Eden McCoy) will get more and more complex. There’ll also be whispers around Port Charles about who this teen really is and why he’s suddenly joined the Corinthos household.

Shiloh never stops causing turmoil for long, so Sam McCall (Kelly Monaco) and Jason Morgan (Steve Burton) will await his inevitable next move. Desperation will drive Shiloh down a perilous path, which will put Harrison Chase (Josh Swickard) in hero mode and leave Willow terrified for his safety. However, it could be Shiloh whose luck runs out.

Sam and Jason will also be part of the vanishing Drew case-cracking. They’ll work to figure out the real story behind Drew’s plane crash and could close in on Peter along with suspicious Robert Scorpio (Tristan Rogers). Damian Spinelli (Bradford Anderson) will also lend a helping hand when Jason summons him. Naturally, there’ll be some opportunities for Jason to save the day along the way.

Back with Willow, she’ll face lingering Harmony Miller (Lorraine Miller) chaos as additional crimes of Shiloh’s are exposed. This may have something to do with Willow’s illegal adoption. Most GH fans suspect Willow is Nina Reeves’ (Cynthia Watros) real daughter, so that bomb may drop eventually. It looks like Willow will also find out the real Wiley died, so she’s in for a rough time.

Elsewhere, Michael Corinthos (Chad Duell) will have a rough time of his own. He’ll have to decide if he can get past Sasha Gilmore’s (Sofia Mattsson) fake daughter lie. Can their relationship survive Sasha’s deception? Will Michael be willing to keep his lips sealed for Nina’s sake?

Finally, Kendra Lennon’s (Michelle Argyris) connection to Alexis Davis (Nancy Lee Grahn) will be revealed. As Alexis and Neil Byrne’s (Joe Flanigan) bond grows stronger, Kendra could pose a serious threat to her target’s happiness. It sounds like danger may be just around the corner!

That’s it for your fall preview. We’ll give you updates as other GH news comes in. Stay tuned to the ABC soap and don’t forget to check CDL often for the latest General Hospital spoilers, updates and news.