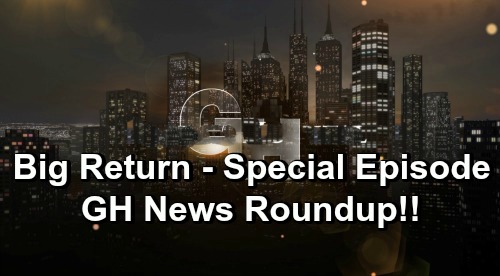 General Hospital (GH) spoilers reveal that there’s been some big news happening in the soap world. Let’s take a look at some of the hottest GH buzz and updates that have been shaking up social media. For starters, we should talk about a special event that’s set to hit the air. On April 2, General Hospital will celebrate their 56th anniversary with an episode that looks back on GH history.

Denise Alexander will reprise her role as Dr. Lesley Webber for some great scenes. She’ll catch up with Dr. Monica Quartermaine (Leslie Charleson) and plenty of other General Hospital characters. We’ll see some tribute scenes for Dr. Gail Adamson (Susan Brown) as Alexis Davis (Nancy Lee Grahn) helps honor her final wish: a warm gathering that includes all her loved ones.

Naturally, some fun flashbacks will be part of this anniversary celebration. GH viewers will definitely want to tune in next Tuesday, April 2. Next, let’s discuss a GH alum’s good deed. Brandon Barash (ex-Johnny Zacchara) recently debuted as Stefan DiMera on Days of Our Lives. However, he found time to contribute to a worthy cause in his personal life and urged others to do the same.

“Found $5 @ the gym. Asked around, couldn’t find its owner. SO — I’m donating it to @MDAorg,” Barash said. He also encouraged his fans to donate and send him their receipts so he could match them. The Muscular Dystrophy Association is a nonprofit health agency that can always use more funding and awareness, so kudos to Barash for turning his lucky cash discovery into a helping hand.

Found $5 @ the gym. Asked around, couldn’t find its owner. SO — I’m donating it to @MDAorg. Additionally, I’m matching all donations to MDA today up to $500. DM me your email receipts, and I’ll match your donations! Let’s turn $5 into $1000! Go!Click link! https://t.co/LPqLsHrPA3 pic.twitter.com/MbrQdU80L2

In other GH news, General Hospital spoilers say Dante Falconeri’s (Dominic Zamprogna) short stint is winding down. Fortunately, we’ve been getting some great Dante moments – like the sweet chat he had with his beloved mom, Olivia Falconeri (Lisa LoCicero). LoCicero received plenty of praise for that weepy conversation, so she offered some comments on Twitter.

LoCicero said, “Didn’t actually mean to cry like they were sending Dante to the abattoir.. but it could be our last scene together.. who knows..?” Of course, LoCicero’s TV son had to chime in. “Love u mumma,” Zamprogna replied. Let’s hope this won’t be the last time Dante and Olivia are ever on screen together. There’s always a chance Dante will come back down the road and reunite with his family.

You’re all caught up on the latest soap news! We’ll give you updates as other GH info comes in. Stay tuned to the ABC soap and don’t forget to check CDL often for the latest General Hospital spoilers, updates and news.