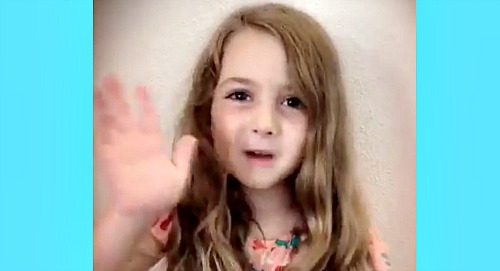 General Hospital (GH) spoilers reveal that one ABC soap star is incredibly grateful for fans’ support. Whenever a recast hits the screen, you never know how viewers are going to react – particularly in the case of SORASed kid characters. However, General Hospital fans usually step up to support the newbie, and that was certainly the case with the new Scout Cain.

After Ella Ramacieri replaced Palmer and Poe Parker in the role, she got plenty of love from GH watchers on social media. Ella gained many new followers and received lots of messages praising her sweet debut. Her mom runs her social media accounts, but she passed along a cute video of gratitude from Ella herself.

“Hi, everybody,” she said with a wave. “It’s me, Ella. I play Scout on General Hospital and thank you all for following me.” Ella blew her fans a kiss to wrap things up and waved goodbye. The video brought cuteness overload just like Ella’s recent scenes with Billy Miller (Drew Cain) and Nancy Lee Grahn (Alexis Davis).

Ella replied to several comments through her mom and had only wonderful things to say about her costars. When someone praised the daddy-daughter moments she shot with Miller, Ella insisted she had a blast on set. She said, “Aw thank you so much I had so much fun working with him and @NancyLeeGrahn they were great with me!”

Of course, some viewers mentioned Scout’s other family members. It’d be awesome to see Scout interact with her big brother, Danny Morgan (Porter Fasullo), who was also aged a bit recently. Some scenes with Uncle Jason Morgan (Steve Burton) would be nice, too. Sam McCall (Kelly Monaco) definitely needs to spend some time with now older little girl, so that’ll hopefully come soon.

Ella said she was looking forward to meeting the rest of the cast and shooting more scenes whenever GH calls. She’s just waiting on the show to let her know when to show up! General Hospital spoilers say there’ll be major Shiloh Archer (Coby Ryan McLaughlin) drama going on for a while, but this story has to wind down eventually. GH can squeeze more family time in once the pressure’s off.

General Hospital fans won’t want to miss what’s next in Port Charles. We’ll give you updates as other GH news comes in. Stay tuned to the ABC soap and don’t forget to check CDL often for the latest General Hospital spoilers, updates and news.

THANK YOU everyone who is supporting me on General Hospital. Love you all!!! ❤️❤️❤️ #Scout #Generalhospital #GH @GeneralHospital pic.twitter.com/ePS90jssJ3