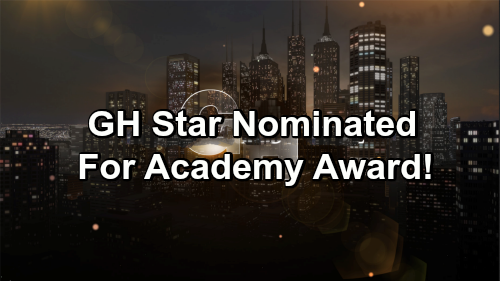 General Hospital (GH) spoilers has some exciting news to pass on about a former GH star. Jaime Ray Newman, who portrayed Kristina Cassadine on the ABC soap, has been nominated for a 2019 Academy Award.

Kristina Cassadine was the younger sister of Alexis Davis (Nancy Lee Grahn) and appeared on General Hospital from 2001-2002. She was separated from Alexis as a baby, but the two were later reunited as adults. In 2002, she was tragically killed in a warehouse explosion after a bomb set by Luis Alcazar (Ted King) detonated.

Jaime is one of the producers of a short film titled “Skin,” which has been nominated for Best Live Action Short Film. The film tells the true story of Byron Widner, a poor man who was raised by skinheads. He then turns away from that life with the help of an African-American activist and the woman he loves.

Jaime’s husband and critically acclaimed filmmaker, Guy Nattiv, is also a producer of the short film, and he additionally wrote and directed Skin.

Jaime and Guy are thrilled about their film’s nomination. After the nominations, Jaime posted the following message on Instagram: “Greatest 5am wake up call EVER! THANK YOU ACADEMY!!!! SKIN THE SHORT, nominated for Best Live Action Short 2019 Academy Awards!!!”

Jaime also shared a video of their reaction to seeing Skin get nominated during the televised Academy Award nomination announcements, and it’s clear that the couple is through-the-roof happy about the recognition that the film is receiving.

Our congratulations go out to Jaime and Guy on their nomination! Stay tuned to the ABC soap and don’t forget to check CDL often for the latest General Hospital spoilers, updates, and news.