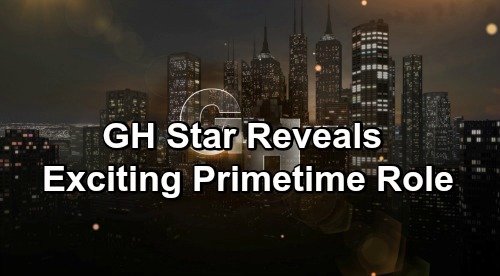 General Hospital (GH) spoilers reveal that one ABC soap star is enjoying the primetime spotlight. GH viewers know Scarlett Fernandez as Charlotte Cassadine in Port Charles, but we haven’t seen as much of her lately. Fortunately, Fernandez is keeping busy with some side projects, including a role on another ABC show.

Fernandez’s Instagram account featured a cute photo of her on the set of American Housewife. She debuted in the April 23 episode, but she’ll back for more scenes on April 30. GH fans may want to tune in and check out Fernandez playing a different character. From the sound of her post, Fernandez clearly loved portraying Maddy.

“They called it work. I called it a super fun play date. I had a blast playing Anna-Kat’s friend on @americanhousewifeabc,” Fernandez said. This certainly isn’t the first time Fernandez has scored exciting roles outside of GH. She’s also been featured on shows like American Horror Story, Shameless and Jane the Virgin.

IMDB also lists Fernandez’s name on the credits for Avatar 2, which is currently in post-production and should hit the screen in 2020. Fernandez is quite the scene-stealer on General Hospital, so it’s no surprise that she’s scoring work elsewhere.

Of course, Charlotte will remain on canvas and will pop up as needed. Fernandez did a great job with the bullying scenes that were a crucial part of Aiden Webber’s (Jason David) storyline. Since Charlotte has also gotten to know Sasha Gilmore (Sofia Mattsson) as Nina Reeves’ (Michelle Stafford) daughter, she’ll probably be part of the upcoming family chaos, too.

Unless GH writers have some major twist up their sleeve, Sasha isn’t actually Nina’s biological child. Nina’s going to be hurt and confused, so Charlotte may join her in that same boat. General Hospital spoilers say Valentin Cassadine (James Patrick Stuart) will pay the price for his mistakes. He’ll undoubtedly lose Nina, but he may lose Charlotte’s respect, too.

There’s a chance Nina and Valentin will try to shield Charlotte from her papa’s lies, but they really shouldn’t. Charlotte might as well start getting a grip on who her father is at his core, and that’s often a lying manipulator! We’ll give you updates as other GH details emerge. Stick with the ABC soap and don’t forget to check CDL often for the latest General Hospital spoilers, updates and news.

A post shared by Scarlett Fernandez (@officialscarlettfernandez) on Apr 23, 2019 at 3:25pm PDT