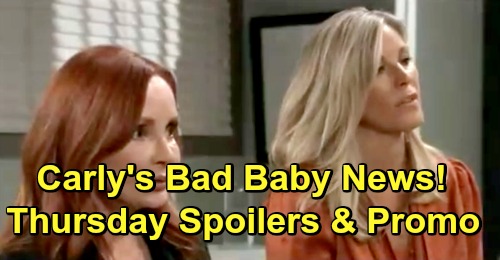 General Hospital (GH) spoilers for Thursday, April 25, tease that Laura Webber (Genie Francis) will wonder if Dr. Kevin Collins (Jon Lindstrom) is sure about the plot. She offered encouragement, but she won’t want Kevin to go through with it unless he’s positive. However, Kevin will agree the best way to lure Ryan Chamberlain (Jon Lindstrom) out of hiding is to fake a romance with Ava Jerome (Maura West).

Over with Ava, she’ll catch up with Felicia Scorpio (Kristina Wagner). Ava will seem chipper as she asks if Felicia’s ready to put their plan into action. Felicia knows this scheme could actually work, so she’ll undoubtedly express support.

Mac Scorpio (John J. York), on the other hand, will blow his top in Thursday’s episode. Whether he’s brought in the loop or duped to help sell the story, Mac isn’t going to be pleased. While Kevin and Ava move forward with their pretend feelings for each other, Lulu Falconeri (Emme Rylan) will return to town. She’ll be eager to help someone out, but who will it be?

It’s possible Laura will fill Lulu in on what’s going on, but that might be risky. If Laura claims things are over with Kevin, the help could come through Lulu’s comfort.

Meanwhile, Josslyn Jacks (Eden McCoy) will keep savoring her time with Oscar Nero (Garren Stitt). She knows he won’t live to see the Nurses Ball, but that won’t stop her from acting like they can give a mind-blowing performance. It doesn’t hurt to live in a fantasy bubble right now. Oscar and Joss have to cope with his imminent death, and this is how they’ll choose to do it.

At GH, Cameron Webber (William Lipton) will get another lecture from Elizabeth Webber (Rebecca Herbst). She’ll insist they have to find a way through this, so Cam and Franco Baldwin’s (Roger Howarth) tension may still be an issue.

Aiden Webber’s (Jason David) bullying also doesn’t need to be handled through Cameron’s fists, so Liz may remind her son of that and hope the family drama eases up.

Later, General Hospital spoilers say Cam will be on the receiving end of Josslyn’s wrath. They’ll likely clash over Oscar, but Josslyn’s fear and pain will undoubtedly be driving this conflict. She’ll mask sorrow with anger, so Cameron may understand and back off.

Back at GH, Carly Corinthos (Laura Wright) will meet with her OB-GYN. With Bobbie Spencer (Jacklyn Zeman) by her side, Carly will ask “how high are the chances that this baby will inherit it?”