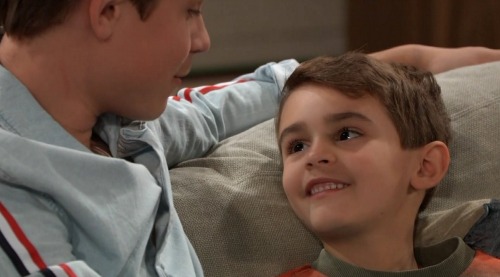 General Hospital (GH) spoilers tease that bullying will remain a problem for Aiden Webber (Jason David). GH fans know Charlotte Cassadine (Scarlett Fernandez) was once the ringleader, but she got a lecture and backed off. Nevertheless, Charlotte warned that the other kids might not let up.

Bullying comes in many different forms, so this involves more than just name-calling and teasing – although Aiden has definitely experienced those things. Aiden is also treated like an outcast for being different. He’s a sensitive kid with different interests than most boys his age, so his classmates view him as weird instead of embracing his uniqueness.

Of course, Elizabeth Baldwin (Rebecca Herbst) and Franco Baldwin (Roger Howarth) arrived at the conclusion that Aiden might identify as gay one day. General Hospital spoilers say they’ll share that hunch with Cameron Webber (William Lipton) after he defends Aiden at school. Another teen will toss around a homophobic slur during a conversation about Aiden, which will unleash Cam’s wrath.

However, Cameron himself won’t have the ideal reaction when he learns what Franco and Liz suspect. He may not exactly be mean about it, but he won’t be as supportive as Liz and Franco would’ve hoped. After Franco blasts Cameron, he’ll decide to take matters into his own hands. Franco will try a new strategy to deal with the bullying issues that Aiden’s still facing.

General Hospital spoilers say Franco will reach out to Nina Reeves (Michelle Stafford) for help. He’ll hope Nina can plant an idea in Charlotte’s head. She’s one of the most popular kids in class, so she’s got some influence. Franco will believe Charlotte could put in a good word for Aiden with her classmates. If she views Aiden as “cool,” Franco will think maybe it’ll rub off on the others.

Unfortunately, it’s doubtful it’ll be that easy. GH is highlighting a very real problem with this storyline, and the timing is certainly appropriate. Several General Hospital stars tweeted out in support of GLSEN’s Day of Silence. This organization works to create safe, LGBTQ-inclusive K-12 schools. April 12 was a day set aside to show support for LGBTQ youth and work toward ending the harassment.

“I support today’s #DayOfSilence in the hope that no child will have to face harassment at school,” Jon Lindstrom (Dr. Kevin Collins) tweeted. “And I challenge @CadyMcClain @MauraWest and @lldubs to join me.”

Both West and Wright tweeted out a statistic and GLSEN’s statement of support. They said, “Nearly 80% of #LGBTQ students experience harassment at school. Please join me and stand with #LGBTQ youth today during @GLSEN’s #DayofSilence.” These soap stars posted short videos of themselves sitting in silence as promised, so it’s great that they’re spreading the word along with Aiden’s GH storyline.

I support today’s #DayOfSilence in the hope that no child will have to face harassment at school. And I challenge @CadyMcClain @MauraWest and @lldubs to join me. @glsen pic.twitter.com/O7DAlGnhyI