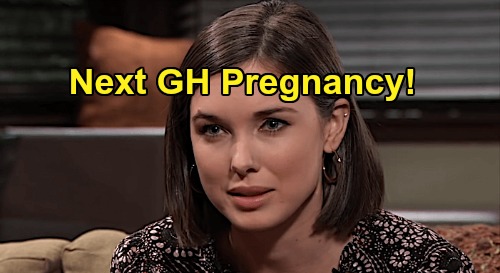 General Hospital (GH) spoilers tease that Willow Tait (Katelyn MacMullen) will find herself lost in thought. During the week of November 18-22, Willow will do some self-examining. There’s no word on why Willow will be feeling so introspective, but it could tie in with Thanksgiving. Perhaps Willow will reflect on her past, the concept of family and what she wants for herself.

It makes perfect sense if GH still intends to go with Willow as Nina Reeves’ (Cynthia Watros) biological daughter. They’ve been laying the groundwork for that all along, so now would be a good time to lay a bit more. Willow reconnected with Harmony Miller (Inga Cadranel) after Harmony turned against Shiloh Archer (Coby Ryan McLaughlin). However, it’s not like they can have a real relationship with Harmony stuck behind bars.

Willow doesn’t have any other family to bond with, but at least she’s got Harrison Chase (Josh Swickard). Chase may get Willow to open up about this pensive mood she’s in. Willow might admit that she can’t quite grasp the idea of a big happy family. She may suggest she’s glad “Wiley Cooper-Jones” (Erik and Theo Olson) has one – but she could be wishing it was with her at the same time.

As Thanksgiving approaches, Chase might assure Willow that she’ll always be “Wiley’s” mom. He may remind her that Brad Cooper (Parry Shen) and Lucas Jones (Ryan Carnes) want Willow in “Wiley’s” life. Unfortunately, total devastation is brewing for Willow sooner or later. “Wiley” isn’t really her child, so she’s going to be heartbroken when the truth finally comes out.

Willow fought hard to protect “Wiley” from Shiloh and has bonded with him thinking he was her son. How will Willow cope with the blow to come? General Hospital has had several scenes involving Chase and Willow’s desire for kids. They’re obviously not ready for that step, but since when do soaps wait until parents-to-be are ready? A soap baby comes whenever it works for the storyline.

Now that Carly Corinthos (Laura Wright) has had little Donna Corinthos, maybe it’s time to put another bun in someone’s oven. It’s always a good idea to have more baby drama brewing since pregnancies take a while to play out. They rarely take a full nine months on soaps, but it’s a still a lengthy story commitment.

Once Willow is crushed by the news that the real Wiley died, what will pull her out of the darkness? Could GH deliver another baby – one Willow doesn’t have to hide from a cult leader and can raise herself? That seems fair at this point! Poor Willow’s been through a lot and still has more chaos ahead of her. A “Chillow” baby could serve as the light at the end of the tunnel.