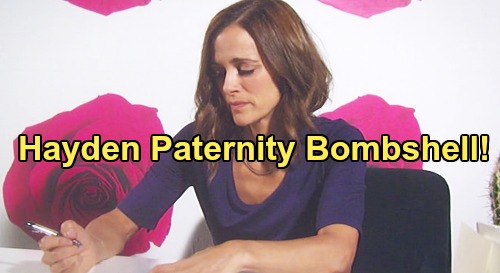 General Hospital (GH) spoilers reveal that there are lingering questions about Hayden Barnes’ (Rebecca Budig) child. GH fans will recall that Hayden was floored to find out she was pregnant.

After all the blackmail and embezzlement drama blew up, Hayden left town in a hurry and later wrote Hamilton Finn (Michael Easton) a letter claiming she’d miscarried.

Obviously, that wasn’t true. General Hospital viewers saw that Hayden was still very pregnant, so why did she lie to Finn? Was it just to make sure he’d forget about her and move on? Could there have been a deeper reason? After all, there’s no guarantee Hayden had Finn’s baby. GH could easily make this someone else’s kid if they wanted to.

Hayden Barnes Stunned To Find Ex-Husband Out Of Prison

Hayden found out she was pregnant in May 2017 before her ex-husband, Jared Preston Jr. (Matt Corboy), showed up to scheme with Liesl Obrecht (Kathleen Gati) in July. The beginning of August 2017 brought a shocker for Hayden.

She was stunned to find out Jared was out of prison, so he offered early parole as an explanation. Jared still called Hayden by the name Rachel Berlin and was out of the loop on her new life until Liesl filled him in.

As a result, Jared probably isn’t the “baby daddy” unless GH wants to do massive rewrites. Then again, Sonny Corinthos (Maurice Benard) went from a body disposer to the murderer in the field in Croton story, so stranger things have happened! Still, this might be an opportunity to introduce a new character or perhaps a hidden connection with one from the past.

Could Nikolas Cassadine Be The Father Of Her Baby?

Could Hayden have hooked up with someone else offscreen? General Hospital fans will forgive a lot as long as the story’s interesting. Since Nikolas Cassadine (last played by Nick Stabile) is likely headed back in some form, is there a chance Hayden found out he was alive and kept quiet? If they made amends and one thing led to another, GH could sneak in a different rewrite that makes him the father of Hayden’s kid.

Of course, it could be someone else who was actually on canvas back then. Hayden’s always had her fair share of secrets, so there’s no predicting what she was keeping from Finn then or now. Finn is a great guy who would be an excellent father, so there’s really no reason for Hayden to deceive him – especially since she’s still in love with him.

Hayden may just be in too deep with her lie, but there’s also a chance this isn’t Finn’s son or daughter at all. General Hospital spoilers suggest there’ll be some twists in Hayden’s storyline, so could a paternity bombshell be one? We’ll give you updates as other GH news comes in. Stay tuned to the ABC soap and don’t forget to check CDL often for the latest General Hospital spoilers, updates and news.