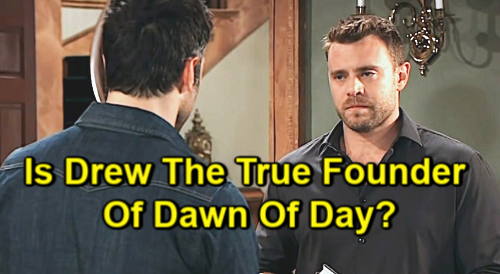 General Hospital spoilers tease that Drew Cain (Billy Miller) may be killed off of General Hospital if Billy Miller leaves the soap. Although not yet officially confirmed, buzz has been swirling about Miller leaving since Michelle Stafford (Nina Reeves) and Elizabeth Hendrickson (Margaux Dawson) both left GH for their former CBS show, The Young and the Restless (Y&R).

Miller had also arrived at GH from Y&R, and there has been speculation he may return. Of course that would leave Y&R’s current Billy Abbott, Jason Thompson, free to reprise Dr. Patrick Drake at GH. However, neither show and neither Miller himself nor Thompson have given fans any clues.

General Hospital buzz has teased that when Drew’s memories return, he will be a dark character, and possibly the true founder of Dawn of Day.

Although General Hospital has not released spoilers beyond July 30, Drew fans can be assured that the package sent to him, that CDL General Hospital spoilers have teased, will not have a bomb in it that kills him. Although a down the road spoiler for July 30 indicates Drew will experience some kind of a setback.

If Drew is killed off the canvas of General Hospital, how might this come about? There could be several different scenarios that would work with what is happening in current storylines.

An unresolved storyline exists with Shiloh Archer (Coby Ryan McLaughlin). This is the story of how Drew and he knew each other in Afghanistan. It all happened before Drew was intercepted by Cesar Faison (Anders Hove) and trained as Helena Cassadine’s (Constance Towers) “toy soldier.” He had also been half of the memory mapping study, receiving his twin Jason Morgan’s (Steve Burton) memories.

There was also a control chip implanted in his brain, when he first came to Port Charles, and it was found and removed by Dr. Patrick Drake. This control chip was probably a brainwashing mechanism of some type. Shiloh seems very interested in Drew not getting his memories back.

Shiloh Archer Would Not Want Drew Cain Truth To Come Out

Things could change quickly, however. If Drew was the true founder of Dawn of Day, Shiloh would not want that truth to come out. He may fear Drew would kill him over it, and he also wouldn’t want to lose his cash cow.

General Hospital spoilers say that scenario also seems less likely now that Shiloh is in jail. The DOD cult is disbanding bit by bit, at least in Port Charles, plus they have lost their building, and Shiloh’s cash cow may no longer be “giving milk”!

It does seem more likely, however, that Drew may be thinking more about trying to get his memories back in spite of the risks of losing his memories from the last few years. Drew’s setback could either be related to his having the procedure done and it failing, possibly leading to his death if it involves any type of brain surgery.