General Hospital Spoilers: Is Michael a Better Match for Willow Than Chase? GH Fans Weigh In on Shifting Love Triangle 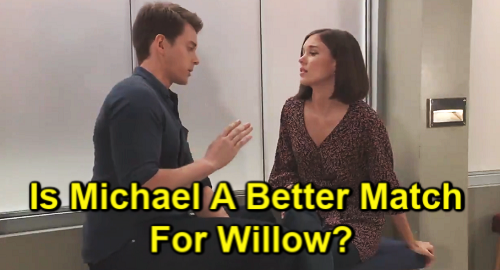 General Hospital (GH) spoilers tease that Willow Tait (Katelyn MacMullen) will naturally remain a key player in the baby drama. “Wiley Cooper-Jones” isn’t really her son, but she believes he is and that’s what matters right now. This storyline is pulling in plenty of characters and setting up some good layers that’ll be peeled back later.

One of the the most interesting things to happen so far is the development of Willow’s character. At first, Willow seemed poised to be just another woe-is-me newbie that would inevitably hit the road.

However, Willow has become one of those rare new characters that just works. Once we learned more about what she’d been through, her pain made sense and we could sympathize.

Katelyn MacMullen’s performance has been a huge part of that. She manages to pull off Willow’s sweet and vulnerable side without making Willow seem weak. It was smart for GH to include Willow’s current feud with Nina Reeves (Michelle Stafford) as well as have her standing up for “Wiley.” That shows us Willow’s got some fire and prevents her from being just another damsel in distress.

MacMullen has great chemistry with Josh Swickard (Harrison Chase), so many GH fans are still loving Chase and Willow together. Nevertheless, these Michael Corinthos (Chad Duell) and Willow scenes are becoming quite enjoyable, too. Are they winning you over? Some viewers are starting to admit that “Millow” has potential!

“I love Chase and Willow, but I do like her and Michael,” said one General Hospital fan on Twitter. Another viewer insisted, “Stop making me like Michael and Willow cause I love Willow and Chase!” “I’m legit torn between #Chillow & #Millow,” said one more fan. Another fan echoed that idea. “#Millow #Chillow…stop making me choose!”

Viewers Are Getting A Bit Conflicted

It’s clear that some GH watchers are getting a bit conflicted here. The more scenes Michael and Willow share, the more many of us like them together. If we had one qualm, it’s that Duell and MacMullen perhaps look a little too much alike.

Willow and Michael could pass for siblings if we’re being honest. Even so, we obviously know they’re not related and they do sparkle onscreen.

What are your thoughts on Willow’s best love interest? Are you starting to root for Michael and Willow? Do you still think Chase is the right guy for her? General Hospital spoilers say complications are coming for “Chillow” eventually, so stay tuned.

We’ll give you updates as other GH news emerges. Stick with the ABC soap and don’t forget to check CDL often for the latest General Hospital spoilers, updates and news.