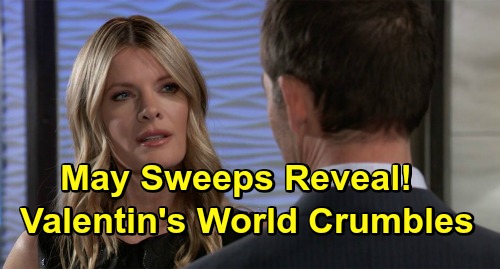 General Hospital (GH) spoilers tease that Valentin Cassadine’s (James Patrick Stuart) web of lies will crumble. He was desperate to win back Nina Reeves (Michelle Stafford), so he cooked up scheme involving Sasha Gilmore (Sofia Mattsson). Valentin didn’t see the harm in letting Nina believe Sasha was her daughter, but suspicions are revving up and the secret’s about to spiral out of control.

There’s a good chance the truth will come out just in time for May sweeps. We’d say Nina and Valentin’s wedding seems like an excellent time for that bomb to drop. GH fans have come to expect the worst when it comes to Valentin, but how does his portrayer feel about his actions? In an interview with Soap Opera Digest, James Patrick Stuart offered his thoughts on the bombshell.

Stuart admitted the secret is “brutal” and suggested he understands why viewers might be upset with his character. Valentin knows Nina has longed for a child more than anything, so he’s manipulating her with her deepest desire. Even so, Stuart can’t help but enjoy the storyline.

“I love it because if I talk to 10 people on the street, 10 out of 10 of them are gonna say, ‘That’s awful. That’s so awful I can’t even look at it,’” Stuart said. He added that even Valentin himself gets how awful this is. Still, Stuart tried to wrap his head around Valentin’s motivation and why he was willing to go this far.

“I don’t think he actually thought beyond the end of just getting her back in the bedroom and back in his life,” Stuart said. “He needed it so badly that he was willing to deceive.” That deception will continue to bring some close calls during the weeks ahead. General Hospital spoilers say Sasha will become an even bigger problem as guilt weighs heavily on her heart.

Sasha will decide she has to confess during the week of March 25-29. It sounds like Valentin will have to talk her off the ledge – by force if necessary! He’ll do whatever it takes to keep Sasha quiet, even if it means hurling some vicious threats.

Stuart noted that Valentin can’t avoid the ramifications of what he’s done, so he’d really just delaying the inevitable. “There’s gonna be a consequence for this and maybe today won’t be the day, but the consequence comes,” Stuart said.

Will Valentin lose Nina for good or will finding her real daughter undo the damage? General Hospital spoilers hint that Willow Tait (Katelyn MacMullen) may be Nina’s true biological child, so that could kick off a whole new set of problems. Nina and Willow clearly don’t get along, but maybe Valentin can help bring them together and fix some of his mistakes.

Regardless, General Hospital viewers won’t want to miss the daughter mayhem that’s coming up. We’ll give you updates as other GH news emerges. Stay tuned to the ABC soap and don’t forget to check CDL often for the latest General Hospital spoilers, updates and news.