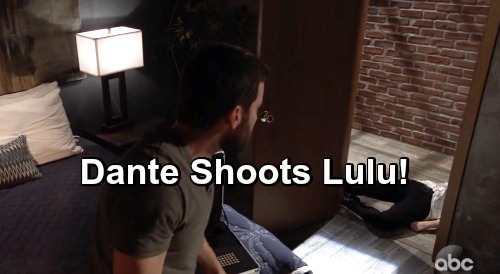 General Hospital (GH) spoilers tease that Dante Falconeri (Dominic Zamprogna) has a rough week ahead of him. He had a wonderful reunion with Lulu Falconeri (Emme Rylan), but things can only go downhill from here. Dante has seen and experienced some dark things since he last saw Lulu. He’s trying to bottle up his feelings and move on, but that plan won’t work for long.

The trouble will begin on Monday’s new GH episode, March 25, when Dante has a startling nightmare. He’ll keep repeating that he has to complete the mission. GH spoilers say Dante will end up firing a shot at Lulu, who will collapse right in front of him. Dante will also show no emotion in this horrifying dream. He’ll seem emotionally detached from his actions, which is obviously quite concerning.

Nevertheless, Dante will stick to his goal of putting his mission behind him. He’ll try to tell himself that’s all over now, but he’ll just be ignoring the problem. Dante can’t bottle up what happened to him and forget about it. The longer he lets himself be tormented, the more likely it becomes that he’ll snap.

General Hospital spoilers say another incident will come thanks to Olivia Falconeri (Lisa LoCicero). She’ll mean well, but her surprise party plan will actually be pretty tough on Dante. For starters, he’s clearly on edge right now. Having people pop out and scream at Dante probably isn’t the best idea.

However, Dante won’t want to disappoint his friends and family members. After he gets over the shock of this shindig, Dante will put on a smile. There’ll be pain in his eyes, but he’ll hope his loved ones don’t pick up on it. Dante will have a warm chat with Olivia, but there’s a good chance this party will end with a bombshell.

Lulu will ultimately make a disturbing discovery, but what will she find? Will Dante step away from the party and zone out? Will he go into the trance-like state from his dreams or even just break down in tears? Whatever the case, Lulu will realize Dante needs more help than she can give him. She may encourage Dante to seek professional assistance before he really goes off the rails.