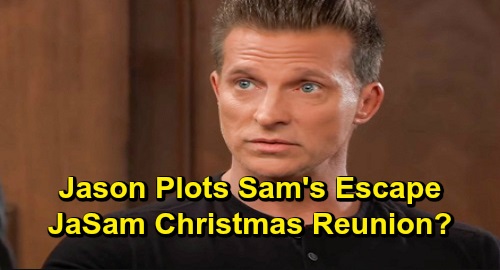 General Hospital (GH) spoilers tease that Jason Morgan (Steve Burton) will do whatever it takes to make sure Sam McCall’s (Kelly Monaco) out of Pentonville and back with their family. Carly Corinthos (Laura Wright) warned Jason that he shouldn’t do anything too risky. She wants Jason to think things through and be there for the kids, but it’s just not in Jason’s nature to avoid taking gambles.

That’s especially true when someone he loves in is in a terrible situation. GH fans know Jason would do anything for Sam, so he’s unbelievably frustrated right now. Even Sonny Corinthos (Maurice Benard) urged Jason to be patient and keep things clean, but Jason wants to take action. If Sam exhausts all other options and is still stuck behind bars, Jason may have no choice but to help her escape.

After all, it’d be downright cruel to have Sam in prison on Christmas morning. She deserves to be home with Jason, Danny Morgan (Porter Fasullo) and Scout Cain (Ella Ramacieri). It’s easy to imagine Jason breaking Sam out and taking her to a safehouse for the holidays. Desperation may drive Jason to make that call at some point.

Of course, Jason would risk adding to Sam’s charges and making matters worse, but he might be willing to do that – especially if Sam’s life is on the line. Nelle Benson (Chloe Lanier) happens to be Sam’s new cellmate, and it’s clear that they don’t get along. If Sam pushes Nelle too far, Nelle could always ask for a favor from a murderous kindred spirit.

Jason derailed Ryan Chamberlain’s (Jon Lindstrom) plan to jump off that bridge near Niagara Falls and die with Ava Jerome (Maura West). Jason also saved Carly that night, which Ryan wasn’t too happy about. Since Ryan has nothing left to lose, there’s no reason why he wouldn’t agree to kill Sam at Nelle’s request. Ryan has a way of blindsiding incompetent guards and accomplishing what he wants.

There’s no guarantee that’s how this General Hospital story will play out, but it would certainly raise the stakes. If Jason fears Sam is in true danger, it could be enough to convince him that an escape is necessary. Then again, maybe the legal system will surprise Jason and give him the “JaSam” family reunion he’s seeking. Either way, let’s hope Sam can be home for the holidays!