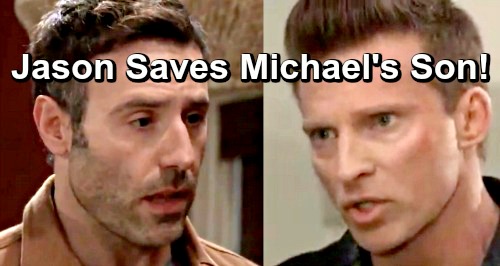 General Hospital (GH) spoilers tease that Jason Morgan (Steve Burton) will soon have a new mission. GH fans know Jason always steps up for the people he cares about. If a family member or anyone he or she cares about is in trouble, Jason rides to the rescue in a flash. He doesn’t know the meaning of the word danger and would do anything to protect an innocent person from harm.

During the week of May 27-31, Jason will worry about someone connected to Shiloh Archer (Coby Ryan McLaughlin) through no fault of his own. Of course, we mean “Wiley Cooper-Jones.” Jason knows Brad Cooper’s (Parry Shen) been lured into DoD, but he doesn’t know just how deep yet. Since Jason has been preoccupied with Sam McCall’s (Kelly Monaco) situation, he hasn’t really put all that together.

However, Jason will soon realize that “Wiley” could be in real danger. That’s the baby Lucas Jones’ (Ryan Carnes) is raising, so GH can work the Carly Corinthos (Laura Wright) angle. Carly knows Shiloh is bad news thanks to all the Kristina Corinthos-Davis (Lexi Ainsworth) drama. She should be concerned if she learns Brad is letting “Wiley” get too close to thig guy.

Carly may get updates from Lucas and pass along her fears to Jason. That’d give Jason a reason to check things out. Carly won’t want her adoptive brother’s happy family put at risk. Then again, General Hospital could have Michael Corinthos (Chad Duell) confide in Jason. These two still have a strong bond, but it’d be nice if GH could play it up a bit more.

This is the perfect opportunity since Michael could fret over his godson and fill Jason in. If Michael learns Shiloh is Wiley’s birth father, that’d add to the pressure here. He doesn’t know Brad and Lucas actually have his own son, Jonah Corinthos, but he still loves “Wiley” with all his heart. Michael would never want any harm to come to “Wiley” or any child for that matter. Jason will feel the same way.