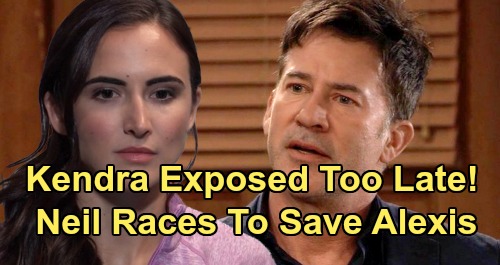 General Hospital (GH) spoilers tease that Hamilton Finn (Michael Easton) will be impressed by T.J. Ashford’s (Tajh Bellow) hunch. He’ll run another test and confirm the presence of thallium in Alexis’ system. Thallium is more commonly known as rat poison, but it’s a horrible thing to ingest no matter what you call it!

After Finn confirms T.J.’s diagnosis, he’ll basically warn Alexis that she’s evidently got a deadly enemy. Finn just won’t see any way Alexis could’ve accidentally ingested rat poison. That’s the kind of thing someone would have to target Alexis with. Finn will urge Alexis to round up a suspect list before this person strikes again.

General Hospital spoilers say Alexis will do just that, but she won’t expect her bubbly personal trainer. The only thing Alexis thinks Kendra Lennon (Michelle Argyris) is guilty of is having too demanding fitness rules. However, Alexis has loved the results of her regime with Kendra – at least until she started taking the rat poison supplement.

Since the first batch of supplement was fine, the thought that Kendra could’ve done this won’t even cross Alexis’ mind. She’ll think of other potential foes who would have a deadly motive, but she won’t consider Kendra. That’s because she doesn’t know Kendra is Kiefer Bauer’s (Christian Alexander) sister. Kendra wants to avenge Kiefer’s death and will do whatever it takes to make sure she pulls off her goal.

After Alexis starts getting the treatment she needs, Kendra will visit and have to put on a fake smile. She’ll pretend she’s glad Alexis is on the mend, but she’ll actually be livid that her plan failed. This was supposed to give Kendra the revenge she was craving! You can bet she’ll keep plotting, which means things are about to get even worse for Alexis.

As for Neil Byrne (Joe Flanigan), he’ll think this is quite the puzzle. GH spoilers say Neil will have a conversation that leaves him curious and brings a few of the pieces together. Will that be a chat with Julian Jerome (William deVry), who’s dealing with a dead rat problem outside his pub? Could Neil run into Kendra and pick up on something instead?

Either way, Neil’s brain will be buzzing with new possibilities. He’ll form a theory that turns out to be incorrect, but he’ll eventually settle on the right one. Neil should realize it’s Alexis’ personal trainer who’s trying to murder her. He may race to stop Kendra’s next attack, but it’ll likely be too late.

General Hospital buzz points to Kendra rushing toward Alexis in her car and trying to mow her down like Kiefer. This could leave Alexis in dire condition, so don’t miss the chaos ahead. We’ll give you updates as other GH news comes in. Stick with the ABC soap and don’t forget to check CDL often for the latest General Hospital spoilers, updates and news.